14 reasons why you should go to Komikon Grande XIV 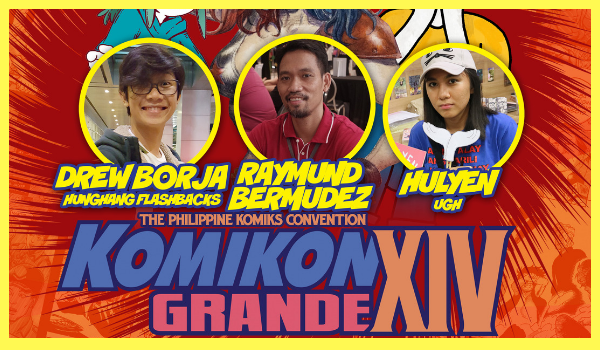 Before award-winning supernatural comics Trese caught the eye of Netflix, its creators were among those who sold copies of their komiks at Komikon, now known as Komikon Grande.

The local convention celebrating komiks is back this coming weekend at Bayanihan Center, Pasig City. Here are 14 reasons why you and your friends should troop to Komikon Grande XIV on Nov. 17-18:

1. Manix Abrera's new book
Manix Abrera is set to release his 14th KikoMachine compilation, Alaala ng Kinabukasan, under Visprint. Make sure you line up early for autographs from this komiks superstar.

3. Watch a docu about the struggles of comics creators.
Luke Miraflor's Sa Likod ng Guhit reveals the sad realities of being a Filipino comic artist. It will be screened on both days at Komikon Grande XIV.

Funny Komiks fans, rejoice! The new Combatron card game is now available for purchase at Komikon Grande. You might also get to meet Berlin Manalaysay, the creator of the Pinoy fighting robot, Combatron.

6. Find out the "kahunghangan"of D. Borja.
Would you believe this licensed nurse-turned-artist, another Komikon main guest, got into webcomics because of his girlfriend's nagging?


It's not everyday you get to meet someone who has worked for mainstream comics. Grab the opportunity to geek out with Raymund Bermudez illustrated DC Comics' JLA 3000 and Klarion, and Marvel's Amazing Spider-Man.

10. Grab a copy of DI-13 70th Commemorative Issue.
Classic comicbook title, DI-13 originally by Damy Velasquez and Jesse F. Santos will have a commemorative book, along with a brand new series illustrated by legendary artist Rico Rival and written by the original creator's grandson, Damy Velasquez III. The New DI-13 features with 13 variant covers. Read more about it here.