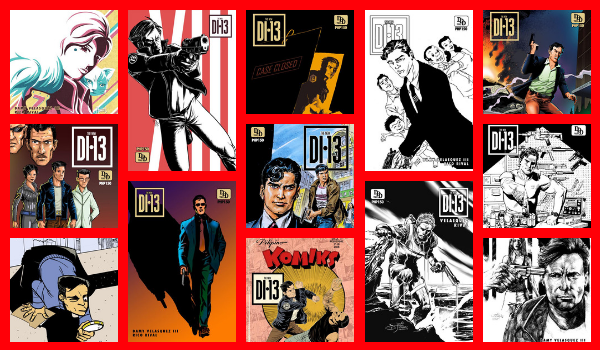 The grandsons of komiks pioneer Damy Velasquez (brother of Kenkoy creator Tony Velasquez) have dusted off 1950s serial "DI-13" for the millenial audience, particularly the crowd set to troop at Komikon Grande 2018 on Nov. 17 - 18 at Bayanihan Center in Pasig City.

DI-13  stands for Department of Investigations Agent Trese. The first Agent Trese (not to be confused with Trese by Budjette Tan who wrote the afterword for its 70th commemorative issue) appeared in Pilipino Komiks back in the 1940s. The series, illustrated by Jesse Santos, ended in early 50s.

The new series now stars the grandson of the original Agent Trese who continues to do detective work in modern Manila. Interior art is done by Rico Rival, under the banner Triple D Publishing.

To celebrate the release of the new series, writer Damy Velasquez III tapped 13 artists, including his brother Tommy, to create variant covers for the New DI-13.