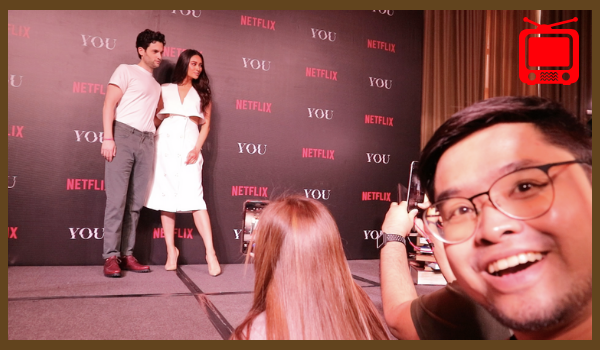 Penn Badgley and Shay Mitchell, stars of the new Netflix Original Series YOU, are in town to talk about their buzz-worthy new show, and to interact with their fans. They kicked off their two-day visit with a panel, “In Conversation with YOU,” held today at The Peninsula Manila in Makati City.

Speaking about the global success of the show, Badgley, who plays Joe Goldberg in the psychological thriller based on Caroline Kepnes’ best-selling novel of the same name, said, “We are happy with the response the show has received worldwide. We have managed to entertain, thrill and scare… the show has highlighted conversations around consent, victim blaming, stalking and privacy - disturbing things that Joe does, which shouldn’t be considered normal”.

“I love working with Shay because we’re different, like the ingredients of halo-halo. Unity in diversity,” he added about his co-star Shay Mitchell.


Now streaming on Netflix, YOU stars Badgley as Joe,  a long-time manager at boutique bookstore Mooney’s, where he meets and falls in love with Beck (played by Elizabeth Lail). Joe is mysterious, resourceful, and is a chameleon. His obsessive love for Beck comes with a few challenges… one of them is Beck’s best friend, Peach Salinger, played by Mitchell. Peach is the heir to the JD Salinger family and has her own complicated relationship with Beck.

“The writing on the show is so incredible, and I love Peach's character. With vast resources and family money, she is the controlling queen bee of Beck’s inner circle of privileged friends.  She has her sights set on Joe, in a way that feels oddly adversarial with Beck. Just to have that back and forth with Penn’s character is hilarious. I really enjoyed playing her,” said Mitchell.

As the conversation came to an end, Penn and Shay gave one last message to their Filipino fans. “Mahal namin kayo” (we love you) while making the heart gesture. “Thanks for being supportive and watching the show,” Penn added.