Penn Badgley and Shay Mitchell are coming to Manila for 'YOU' 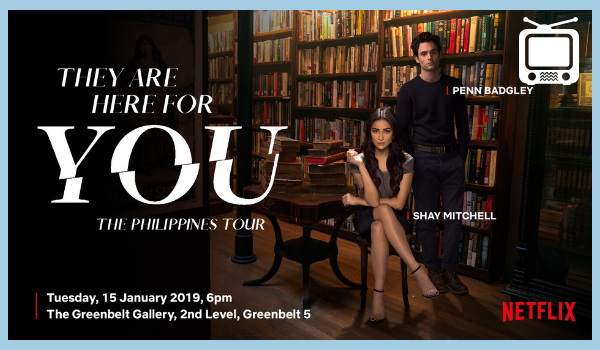 2019 is off to a good start with Netflix bringing the stars of its new Original Series, YOU - Penn Badgley and Shay Mitchell - to Manila, to promote the show and interact with Filipino fans.

Now streaming on Netflix, YOU stars Badgley as Joe Goldberg,  a long-time manager at boutique bookstore, Mooney’s, where he meets and falls in love with Beck (played by Elizabeth Lail). Joe is mysterious, resourceful, and is a chameleon. His obsessive love for Beck comes with a few challenges… one of them is Beck’s best friend, Peach Salinger, played by  Mitchell. Peach is the heir to the JD Salinger family and has her own complicated relationship with Beck.


Penn and Shay will interact with media on January 14 and will appear for a special fan event later at Mooney’s, inspired by the bookstore in the show.  Fans can experience Mooney’s, win swag and get a chance to see Penn and Shay starting 5:30 pm at The Greenbelt Gallery, 2nd level, Greenbelt 5, on Tuesday, January 15.

Apart from YOU, the Filipina-Canadian actress also starred in horror film The Possession of Hannah Grace which will be showing this month. It is not clear if she will also promote the movie during her stay here.

Of course, this is not the first time she went back to Manila. I have interviewed her for Rappler back in 2012.