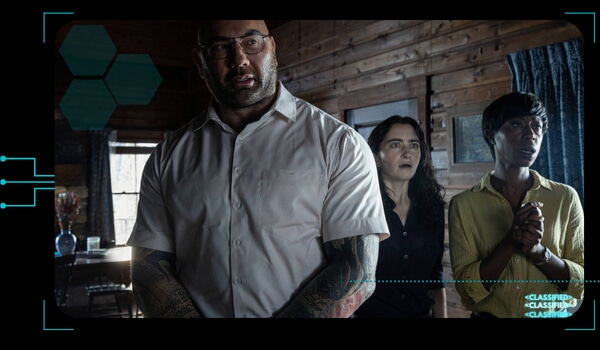 From visionary filmmaker M. Night Shyamalan, Knock at the Cabin takes adopted child Wen (played by newcomer Kristen Cui) with her gay parents Andrew (Jonathan Groff) and Eric (Ben Aldridge) at a remote cabin for a vacation where they soon encounter the most frightening moments of their lives.

Not long before they’ve arrived at the cabin, a group of four armed strangers came knocking – Leonard (Dave Bautista), Sabrina (Nikki Amuka-Bird), Adrianne (Abby Quinn) and Redmond (Rupert Grint) who took them hostage.  The family is informed that these four strangers—who also do not know each other—have all been haunted and tormented by a shared prophecy: that the world will end unless the family in this cabin chooses one member of the family to die.

Based on the national bestseller The Cabin at the End of the World by Paul Tremblay, Knock at the Cabin began, initially, as a 2019 screenplay by Steve Desmond & Michael Sherman that landed a spot on the famed annual film-industry Blacklist, which highlights the best unproduced screenplays each year.

Of all the extraordinary achievements of M. Night Shyamalan’s acclaimed career as a visionary filmmaker, perhaps the greatest is that his films remain enigmatic, unpredictable and unexpected. The only thing you’re certain of, stepping into a new M. Night Shyamalan film, is that you don’t know what’s about to hit you. Knock at the Cabin just may be the apotheosis of the Shyamalan cinematic experience. It’s a film that both shares a bloodline with his previous films but is also unlike any film he’s made before.

For Shyamalan, it was a question that contained multitudes of ideas that connected to the state of our world today. In his hands, Knock at the Cabin is a film that explores ideas behind faith and belief, certainty and doubt, and the power and limits of both.

“It’s a modern-day biblical story,” Shyamalan says. “The idea of telling large-scale biblical stories, but in modern times and in modern settings, is resonating with me right now. The film is reflective of my current feeling that everything that’s going on in the world doesn’t look good and doesn’t feel good, but I do feel we are struggling together in the right direction. We’re certainly not getting it right all the time, but in general, the direction that we’re moving as humanity is in the right direction and we deserve a chance to continue. That’s my feeling. One love story is evidence enough that humanity should keep going. Knock at the Cabin is this incredible opportunity for us to experience this gigantic global biblical story through the experience of a family.”