Celebrate 'A Night of Wonder with Disney+' 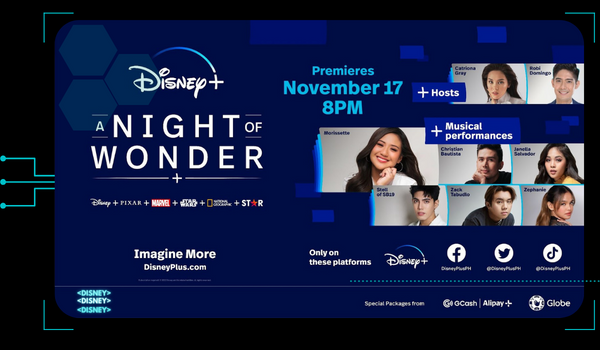 Disney+ is pleased to present A Night of Wonder with Disney+ to celebrate the streaming service’s availability in the Philippines starting today. To mark the expansion of Disney+ to the Philippines, the star-studded showcase will be streamed on the service on Nov. 17, showcasing The Walt Disney Company’s creative excellence and celebrating Filipinos’ passion for music and song.

Hosted by Catriona Gray and Robi Domingo, the special will feature highlights from some of the incredible movies and shows that fans can look forward to watching on Disney+. Local landmarks will be  transformed into stages for some of the Philippines’ most beloved singers including Morissette, Christian Bautista, Janella Salvador, Stell of SB19, Zack Tabudlo and Zephanie.

A Night of Wonder with Disney+ will be available to watch on Nov. 17, 8 pm on Disney+ and the following Disney+ social media platforms  - Facebook, Twitter, and TikTok in the Philippines.

Need inspiration for your first show to watch after A Night of Wonder with Disney+? Check out these eight top picks by Filipino celebrities:

Disney’s The Lion King, directed by Jon Favreau, journeys to the African savanna, where a future king is born. Simba idolizes his father, King Mufasa, and takes to heart his own royal destiny. But not everyone in the kingdom celebrates the new cub’s arrival. Scar, Mufasa’s brother—and former heir to the throne—has plans of his own. The battle for Pride Rock is ravaged with betrayal, tragedy and drama, ultimately resulting in Simba’s exile. With help from a curious pair of newfound friends, Simba will have to figure out how to grow up and take back what is rightfully his. The all-star cast includes Donald Glover as Simba, Beyoncé Knowles-Carter as Nala, James Earl Jones as Mufasa, Chiwetel Ejiofor as Scar, Seth Rogen as Pumbaa and Billy Eichner as Timon.

The Andor series explores a new perspective from the Star Wars galaxy, focusing on Cassian Andor’s journey to discover the difference he can make. The series brings forward the tale of the burgeoning rebellion against the Empire and how people and planets became involved. It is an era filled with danger, deception and intrigue where Cassian will embark on the path that is destined to turn him into a rebel hero.

3. Christian Bautisa - Marvel Studios’ What If…?

What If…? flips the script on the Marvel Cinematic Universe (MCU), reimagining famous events from the films in unexpected ways. Marvel Studios’ first animated series focuses on different heroes from the MCU, featuring a voice cast that includes a host of stars who reprise their roles.

When Steven Grant, a mild-mannered gift-shop employee, becomes plagued with blackouts and memories of another life, he discovers he has dissociative identity disorder and shares a body with mercenary Marc Spector. As Steven/Marc’s enemies converge upon these alter egos, they must navigate their complex identities while being thrust into a deadly mystery among the powerful gods of Egypt.

Ariel, the fun-loving and mischievous mermaid, is enchanted with all things human. Disregarding her father’s order to stay away from the world above the sea, she swims to the surface and, in a raging storm, rescues the prince of her dreams. Determined to be human, she strikes a bargain with the devious sea witch Ursula and trades her fins and beautiful voice for legs. With her best friend, the adorable and chatty Flounder, and her reluctant chaperone Sebastian, the hilarious, reggae-singing Caribbean crab, at her side, Ariel must win the prince’s love and save her father’s kingdom — all in a heart-pounding race against time.

The captain of the East High basketball team and the key member of the academic club shock the student body by teaming to audition for the upcoming school musical in a Disney Original Movie that's all about being yourself and following your dreams. Troy (Zac Efron) is best known as the player who keeps the East High basketball team on the scoreboard. Of course, life isn't always about athletics, though, and as Troy slam dunks on the boards, beautiful and brainy Gabriella (Vanessa Anne Hudgens) is raising the reputation of East High as the key member of the school's successful academic team. Despite their outgoing natures, no one would ever peg Troy and Gabriella as theater types. When word gets out that this popular pair has secretly chosen to reach for the stars and try their luck on the stage, the students of East High are about to learn an important lesson in teamwork while gearing up for a musical performance that will have their audience dancing in the aisles.

It has been 15 years since Giselle (Amy Adams) and Robert (Patrick Dempsey) wed, but Giselle has grown disillusioned with life in the city, so they move their growing family to the sleepy suburban community of Monroeville in search of a more fairy tale life. Unfortunately, it isn’t the quick fix she had hoped for. Suburbia has a whole new set of rules and a local queen bee, Malvina Monroe (Maya Rudolph), who makes Giselle feel more out of place than ever. Frustrated that her happily ever after hasn’t been so easy to find, she turns to the magic of Andalasia for help, accidentally transforming the entire town into a real-life fairy tale and placing her family’s future happiness in jeopardy. Now, Giselle is in a race against time to reverse the spell and determine what happily ever after truly means to her and her family.

From Disney comes the thrilling and vibrant live-action adaptation of the animated classic Aladdin, the exciting tale of the charming street rat Aladdin, the self-determined Princess Jasmine and the Genie who may be the key to their future. Directed by Guy Ritchie, Aladdin features an all-star cast including Will Smith as the larger-than-life Genie, Mena Massoud as the clever scoundrel Aladdin and Naomi Scott as Jasmine, the beautiful, courageous princess of Agrabah.

Disney+ is the dedicated streaming home for movies and shows from Disney, Pixar, Marvel, Star Wars, National Geographic and Star - all in one place. For more information, visit DisneyPlus.com