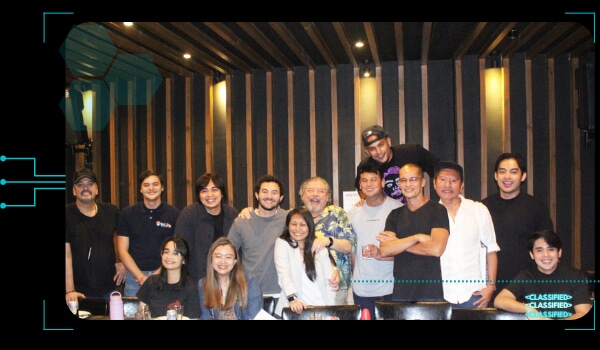 After the success of the pandemic love story “Dito at Doon” in 2021, TBA Studios is ready to roll out its 2022 lineup with a major movie project leading the way.

On April 20, the award-winning film company announced on their Facebook page that it’s teaming up with Sea'N'Sun Film Productions to produce an action-packed crime thriller called “Grace”.

To be helmed by critically acclaimed filmmaker Ato Bautista (“Expressway”), “Grace” tells the story of a college student who seeks revenge for the brutal death of his girlfriend and takes down an elite powerful fraternity whose members and alumni are seated in every power sect of Philippine society.

Musician-turned-actor Iken Ramirez takes the lead role in the movie with a screenplay written by Bautista, Kat Marasigan, and E. A. Rocha based on an earlier treatment developed by the late director Uro dela Cruz.

Rocha, the CEO and Co-Executive Producer of TBA Studios and one of the co-writers of the company’s massive box office hit “Heneral Luna”, felt that “Grace” is a very important story to tell because “it is indicative of the entitlement and abuse wielded by people in powerful positions—a reflection of what is wrong with our country.”

“I can only describe Grace as a relevant, violent and ultimately devastating modern parable that had to be told and cinematically experienced,” he shared.

The cast recently held its first script reading in Quezon City ahead of its principal photography in May. More cast announcements for the film are also underway.

“Grace” is part of TBA Studios’ film offerings for the coming year. This also includes the star-studded comedy “The Comeback Trail” with Hollywood icons Robert De Niro, Morgan Freeman, and Tommy Lee Jones as well as the music documentary “Fanny: The Right To Rock” about the untold story of three Filipina American teens in the 1960s whose trailblazing impact in music was written out of history.

“Film fans will have plenty to get excited about with TBA Studios’ diverse offerings. And this is just our initial lineup! We have more projects to be announced soon,” Chiu said.

Stay tuned to TBA Studios’ pages and tba.ph for more updates on “GRACE” and other films.