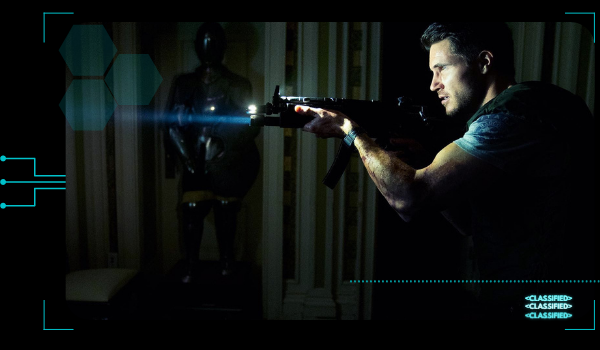 In the film, Claire is the stranger who goes back to her childhood town because she has a sense that something is wrong and feels a deep urgency to get to her brother, Chris, to warn him. “But when we meet Claire and Chris as adults, we notice quite quickly that something has happened between them,” explains Kaya Scodelario who plays Claire. “They find it very difficult to communicate. They don’t quite trust each other. As the story progresses, we learn they have a bond, borne through a traumatic childhood, that they’ve learnt to deal with in opposite ways. Chris joined the police and Claire has gone on the street. As we follow them, they find a way to unite and come back to each other.”

“Chris is the one who drank the Kool-Aid, the one who kept believing in Umbrella,” says producer Robert Kulzer. “He had committed his life to Raccoon and to Umbrella, and felt Dr. Birkin was a father-figure, a mentor to him. He has clearly forgotten or suppressed any evil or creepy stuff that happened when they were kids.”

“I grew up playing all the Resident Evil games,” says Amell, “and it’s a little bit of a dream come true to play an iconic character from my childhood. I remember sitting in my basement, at night, playing the first game – the dogs jumped through the window, and I got the life scared out of me. I loved the games from that point on, I loved how scary they were.”

As a longtime fan, Amell says that stepping into the costumes of the characters he knew so well was thrilling. “One of the best days was the first costume fitting, trying on different versions of Chris’ bulletproof vest,” recalls Amell. “One was from the Vietnam war – almost exactly the iconic green vest Chris wears in the video game. When I put that on, it was clear – this was the one. It sounds silly, but it’s the iconic character piece.”