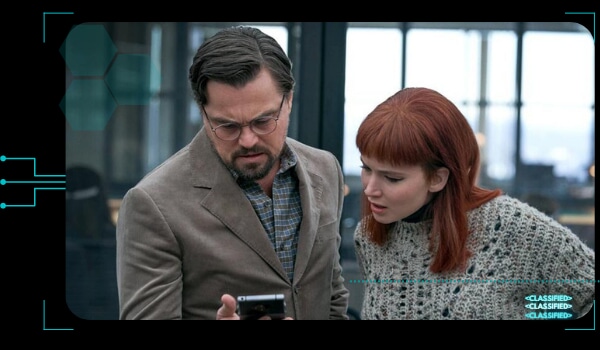 Every disaster movie starts when the government ignores the scientists. The premise of Adam McKay’s Don’t Look Up is no exception. However, recent events where the powers-that-be turn a blind eye on global warming, climate change, vaccination, and even our own government’s leniency at the onset of the coronavirus pandemic make it eerily relatable. Its hook that it is “based on real events that haven’t happened yet” rings true. We now live in a world where science takes a back seat over politics, capitalism, and TV ratings.

The movie is about an extinction-level threat - a deadly comet heading towards Earth, discovered by Kate Dibiasky (Jennifer Lawrence), an astronomy grad student, and her professor Dr. Randall Mindy (Leonardo DiCaprio). They approach every power sect from the White House, media, morning news shows, and even egotistical celebrities to get the word out. You might get drowned in its tongue-in-cheek humor for nearly two hours but don’t worry, it does not lose track of its plot device. Whether this version of Earthlings would survive or not would inevitably unfold.

Don’t Look Up also offers a glimpse of how to get important news out to the people. As Dr. Oglethorpe (Rob Morgan), head of the non-fictional Planetary Defense Coordination Office, puts it, the scientists should not be telling maths but instead, a “story”. Mindy has also been told numerous times he needed “media training”. In PR circles, this concept does exist. Remember the Oscar-winning film Spotlight where the journalists had to bury their story temporarily when the September 11 attacks happened? In the case of Don’t Look Up, the pressing story has to be the third item on a news program where the U.S. court justice’s sex scandal and a singer’s break-up take precedence.

While provocative, the movie does have unnecessary subplots involving infidelity and outright reconciliation. Okay, if these show how the end of the world each affects us, I’d take it. The film’s last scenes are heartbreaking to watch, particularly the reunion of the scientists with their loved ones (and plus ones) over dinner.

All in all, Don’t Look Up succeeds as an offbeat cautionary tale about the willful dismissiveness of scientific facts. It’s Netflix’s way of echoing Greta Thunberg’s “How dare you?”