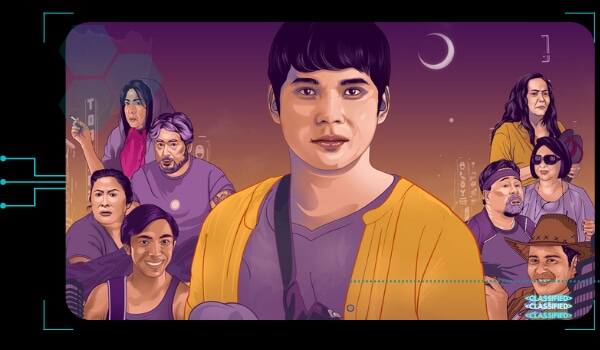 The government's war on drugs is not the most obvious material for comedy yet Jun Lana's Big Night! hits all points. Without being preachy, the film captures this dark portion of the Filipinos' lives with absurdity, usually limited to news reports, documentaries, and drama narratives.

In the film, which Lana both wrote and directed, we meet Dharna (Christian Bables), a gay man who has to bench her plans in helping her boyfriend win his "Big Night" after learning her name is included in a watch list of suspected drug addicts. What follows is a long road to Calvary for Dharna who fears she could be the next target of vigilantes.

Lana's script is brilliantly sharp. The banter does not cringe but instead will crease you in laughter. It also almost does away with stereotypical homophobic jokes. If there are, Dharna blurts them out without shame, only to point out to the bigots that she embraces her identity.

While it is a dark comedy, Big Night! works well with its silent scenes. Case in point is Gina Pareño's cameo as a grandmother carrying bloodied slippers. Time seems to stop when her eyes evoke deep pain and grief.

However, a scene with Dharna's mother played by Gina Alajar feels unnecessary and does not add anything substantial to the movie. It's also not aligned with the tone of the movie and borders on the realm of metaphysics.

The last act then shows Bables as one of the most talented actors of his generation. The movie ends eerily, cementing that Big Night! is a political comedy done right.  After all, humor is not all about making people laugh. It can also resurface truths we choose to turn a blind eye on.  That willful blindness, exhibited by most of its characters, is what keeps this cycle of violence and abuse going in our country.

Big Night! is now showing in Philippine cinemas as part of the Metro Manila Film Festival

Another plus - the movie plays with subtitles. Deaf viewers can also enjoy this film.