P&G teams up with Lazada for regional campaign #GoForGold 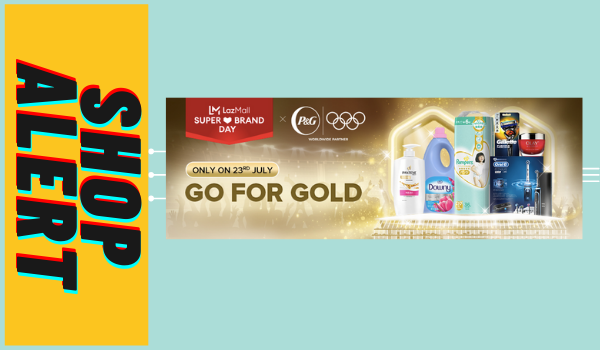 With many having to put their dreams on hold in 2020, the #GoForGold campaign seeks to encourage people to keep their spirits up, to go for gold, and reach for their dreams, even when the going gets tough.

Inspired by the many Olympic and Paralympic athletes who are not only achieving athletic greatness but are also stepping up to take action for good, making a positive difference in their communities, the campaign will feature a short film that unites P&G’s longstanding Citizenship efforts of Community Impact, Equality & Inclusion, and Environmental Sustainability. P&G believes the Olympic Games have tremendous power to unite the world through sport; in Tokyo, and in partnership with the IOC, P&G is celebrating athletes and their inspiring acts of good.

The short film “Your Goodness is Your Greatness” celebrates athletes who show their goodness on and off the field of play. Narrated from the perspective of proud parents, the film features real-life Olympic and Paralympic athletes who are leading with love and showing the world that the true measure of greatness is goodness.

“For years, P&G has supported athletes and their families on the journey to achieving their Olympic and Paralympic dreams,” said Alexandra Vogler, P&G e-commerce Senior Director, Asia Pacific, Middle East & Africa. “In a time when the world needs to come together and hope once again, these athletes set the gold standard in terms of perseverance, courage and selflessness, which we hope will be an inspiration for many others to pursue their dreams and #GoForGold.”

“Lazada is proud to partner with P&G to extend the celebration of goodness, hope, and resilience in a sporting spirit to consumers in Southeast Asia. Our tagline ‘Go Where Your Heart Beats’ is a reflection of what the world needs today - courage and inspiration. This partnership embodies the spirit of positiveness, keeping dreams alive, and fostering connections via LazMall's personalized shopping experiences. All this is made possible through Lazada's digital footprint. Let's all stay safe and enjoy the convenience of shopping from home,” said James Chang, Lazada Group’s Head of Strategic Accounts and Retail.

Beyond the film, the campaign will also come to life on Lazada across six Southeast Asian markets including Thailand, Philippines, Indonesia, Malaysia and Vietnam on July 23, as well as in Singapore on July 28. The shopping extravaganza on LazMall features a wide range of exclusive offers on P&G products such as Pampers, Olay, Pantene, and Oral-B and coincides with the Opening Ceremony of the Olympic Games.