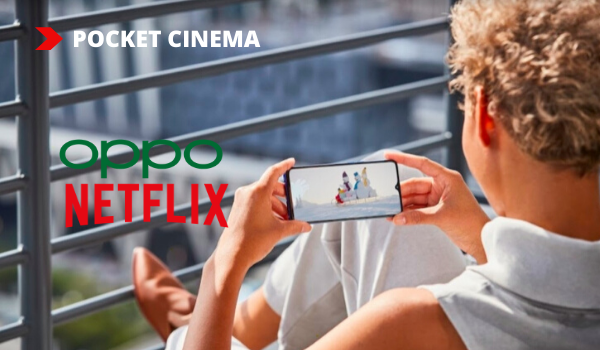 Global smart device brand OPPO announced that it has entered a partnership with Netflix, the world's leading streaming entertainment service, enabling consumers to enjoy movies and TV shows on their new Reno3 Series for a state-of-the-art visual experience, following the cooperation with Netflix on its latest model of Find Series.

In order to deliver the best entertainment audio and video (A/V) experiences possible, OPPO has made great effort to enhance both software and hardware of Reno3 Series, through multiple innovations on audio and visual. With Netflix HD Certification, HD videos are available via the pre-installed Netflix App on Reno3 Series, making high-definition videos accessible right from your pocket.

Joint Forces of Two Leading Players to Bring the Greatest Stories on Display
As the world's leading streaming entertainment service with over 183 million paid members in over 190 countries, Netflix gives its members access to TV series, documentaries, and feature films across a wide variety of genres and languages. Through Netflix’s partnership with OPPO, both are able to provide top-notch quality entertainment to more viewers.
OPPO supplements this with a fully-equipped “Pocket Cinema” device that can go everywhere with the users – the OPPO Reno3 Series. Since the launch of the Reno series in 2019, OPPO has won great love and support from the youth around the world and has established a reputation for its creativity in both design and technology. Multiple technological innovations have been brought to OPPO’s users in Reno in the past, and this time, OPPO Reno3 endeavors to bring high-quality entertainment on mobile, just as it is viewed on TV.
Immersive Watching Experience with Outstanding A/V Effects

The new Reno3 Series will offer Netflix in HD (for users who have the Standard or Premium plans) and the Netflix app pre-installed on the device, for users to enjoy sharp visuals and immersive content any time and anywhere easily with their smartphone.
The Reno Series has upgraded with the Reno3 Pro’s Super AMOLED Screen with E3 luminescent material, which brings a much higher level of brightness than E1 and E2, so that texts and images are clearly visible on the screen even under bright daytime light. More than brightness, the Super AMOLED Screen includes all DCI-P3 color gamut, which is also excellent in expressing a vivid color display. Meanwhile, the power consumption of an E3 screen has been reduced to minimize the risk of a bad viewing experience caused by aging AMOLED screens. This makes the screen quality last longer, while the anti-blue light mode will substantially reduce the proportion of harmful blue light, to lessen the damage of long-time phone use to the eyes. For this, OPPO Reno3 Pro has been recognized by the TÜV Rheinland Full Care Display Certification, ensuring world-class protection for users’ eyes.
To make sure users can watch Netflix for a longer duration with ease, the Reno3 Series’ software has optimized both power consumption and temperature control, enabling longer watch time of up to 14 hours with overheat prevention. In terms of sound effects, Reno3 Series devices support Dolby Atmos®, which delivers not only an improvement on regular A/V content, but also offers a close-to-action stereo effect for Dolby Atmos certificated content. All these improvements on software makes OPPO Reno3 Series a portable home theater that provides a remarkable, immersive, feast for the eyes and ears. The Reno3 Series also optimizes the network connection to achieve faster pre-loading speed and less waiting time.
Total Fun Entertainment Package for the Gen Z

Based on its thorough insights from the younger users and their entertainment habits, OPPO has incorporated technologies beyond innovative design and outstanding visual experience into its products by powering further the Reno3 series with several cutting-edge innovations such as the camera’s zoom and video stabilization, the  VOOC flash charge, and more to meet the diversified demand of different real-life scenarios.
With the demand for short video increasing exponentially, OPPO is the first in the industry that achieved visual optimization for short video at the software level. Through its self-developed technology, OSIE Ultra Clear Visual Effect, OPPO goes the extra mile with the improvement on video image quality, especially with color brightness and saturation for a more refined image display perfect for heavy users of the latest social media craze TikTok. In addition, OPPO Reno3 Series supports Hi-Res-ready earphones and audio source, allowing an even better music experience in high resolution.
Live More With The Reno3 Series

The Reno3 series is officially available in the Philippines through OPPO concept stores nationwide, e-commerce partners and Smart via postpaid plans. Reno3 retails at P18,990 and the Reno3 Pro at P28,990. For Smart, Reno3 will be available at Smart Signature Plan 999 with a PHP3,100 cash-out while Reno3 Pro will be available at Smart Signature Plan 1,699 with a P3,000 cash-out. Both will come with a free Rockspace EB60 Bluetooth Earbuds. The Reno3 is now available on Shopee and will be in Lazada starting May 13. To know further details about the Reno3 series and the list of dealer partners offering the Reno3 series, visit the official website at www.oppo.com/ph or the official Facebook page of OPPO Philippines.