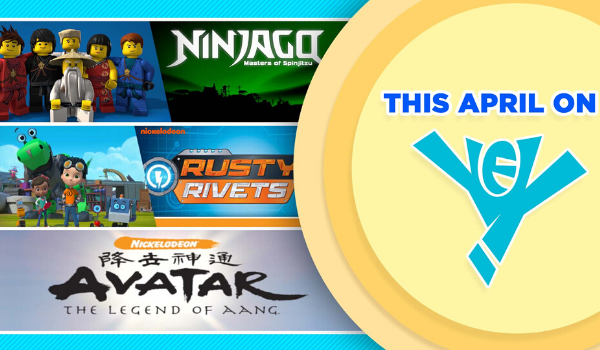 Well-loved action adventures and fun-educational live action and cartoon series are coming to YeY channel this April to give kids more viewing choices.

Adding to the list of programs from internationally-renowned all-kids channel Nickelodeon that YeY viewers have enjoyed through the years, is the banner title “Rusty Rivets” and returning favorite “Avatar, The Legend of Aang.”

In "Rusty Rivets," kids get to learn basic science with Rusty, who uses his knowledge in engineering by making new gadgets using machine parts. Watch him with his friends Ruby and Botasaur as they use technology in solving their problems, Monday to Friday at 9:30 AM.

Returning to YeY is another Nickelodeon hit, "Avatar, the Legend of Aang" every Saturday and Sunday at 11 AM. The story revolves around the journey of Aang and his buddies Katara and Sokka to the North Pole and their quest to find the master of waterbending and learn from him. Aang needs to master all the four elements – air, water, fire and earth to end the war that the Fire Nation started.

Meanwhile devoted Lego fans who have enjoyed the Ninjago toy line will be happy to know that "Lego Ninjago: Master of Spinjitzu" is also coming to YeY. Ninjago and Sensei Wu enlists the help of ninjas, Kai, Jay, Cole, Zane, Lloyd and Nya in their quest to find the four weapons of Spinjitzu to save their world. Viewers can catch on weekends at 1 PM.

Kids also have the chance to watch with the "Magandang Buhay" kids Jordan Lim, Mela Francisco, and Pele Escueta with the launch of  “Pop Babies” Monday to Friday, before SpongeBob SquarePants. The 3-minute show gives kids the chance to learn different kinds of nursery rhymes.

Don't miss the new offerings of YeY starting this April and watch out for its “Watch & Win” promos on YeY's Facebook page for a chance to win exciting prizes.
Labels: animation LEGO Nickelodeon YeY