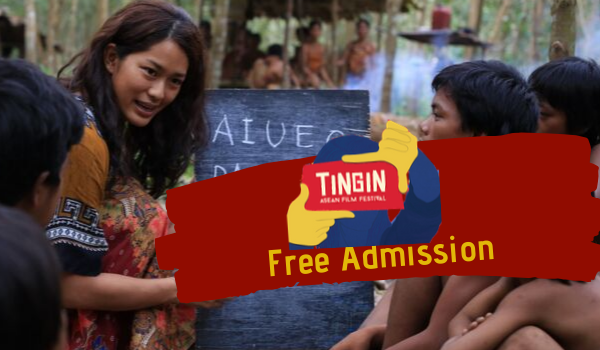 A project of the National Commission for Culture and the Arts (NCCA) to help the country build stronger ties with our Southeast Asian neighbors, the Tingin ASEAN Film Festival is back for a third consecutive year.

Tingin gathers representative films from the Association of Southeast Asian Nations (ASEAN) to draw up a composite picture of the region. In celebration of the International Year of Indigenous Languages, Tingin will showcase films that tackle the stories of indigenous peoples.

The 3rd Tingin ASEAN Film Festival will run from Sept. 26 - 29 at the Shangri-la Plaza Mall Red Carpet Cinema, a proud partner of the festival. It is open and free for the public.

“NCCA is holding Tingin, as well as other projects, to encourage Filipinos to gain a deeper understanding of and therefore form closer ties with our Southeast Asian peers. This year, Tingin takes up the cudgels for indigenous peoples, who continue to be marginalized in society. Most of the films featured in the festival will shine a light on their struggles but also on their fascinating cultures. Many of these films also celebrate indigenous peoples’ languages, which are in danger of becoming extinct. Language, which is a carrier of culture, must be safeguarded,” said Annie Luis, head of the International Affairs Section of the NCCA.


The 3rd Tingin ASEAN Film Festival will run from Sept. 26 - 29 at the Shangri-la Plaza Mall Red Carpet Cinema, a proud partner of the festival. It is open and free for the public. pic.twitter.com/j3WGe8ilpm
— Jerald Uy 🏳️‍🌈 (@jeralduy) September 23, 2019

Three of the directors whose films are part of this year’s festival will be delivering master classes on filmmaking and will attend the screenings of their films. Edmond Yeo from Malaysia, Nontawat Numbenchapol of Thailand, and Bagane Fiola of the Philippines will be sharing their experiences in filmmaking, including their aesthetics and creative process, to students, film practitioners, and walk-in moviegoers.

Edmund Yeo is the director of Aqerat, a film about a woman who is juggling odd jobs at the Thai-Malaysian border to survive. Determined to make it even when she loses all her savings, she accepts her boss’ offer to earn quick money as a human trafficker. The film presents a sweeping tale of displacement and morality in contemporary Malaysia. Yeo won the Best Director prize for Aqerat at the Tokyo International Film Festival.

In Baboy Halas, Bagane Fiola brings audiences to southern Philippines, to show the struggles of a Matigsalug indigenous family in resisting the pressure to adopt mainstream customs. The film won the NETPAC Jury Prize at the QCinema Film Festival and Best Cinematography from the Young Critics Circle.

The Karen indigenous people of the Southern Klity Village of Kanchanaburi, and their struggle against a mineral processing company, are the subject of Nontawat Numbenchapol’s By the River. Numbenchapol is a Thai film director and television screenwriter widely recognized for his documentary work. He received the Young Filmmaker award from the Bangkok Critics Assembly and his debut feature, Boundary, screened across many international film festivals, including the International Documentary Film Festival Amsterdam.

Cannes award-winning director Rithy Panh’s Graves Without a Name will formally open the festival. The film explores grief and loss under the Khmer Rouge, in Cambodia. Panh had lost his most of his family under the violent regime, and in this film, he searches a path to peace.

Another festival highlight is Love Man, Love Woman, an arthouse documentary from Ngyuen Trinh Thi. This film tells the story of Master Luu Ngoc Duc, one of the most prominent spirit mediums in Hanoi, and his vibrant community. It explores how effeminate and gay men in Vietnam have established connections and found a venue for expression under the tenets of the country’s popular Mother Goddess Religion, Đạo Mẫu.

Indonesia’s Riri Riza joins the festival with Sokola Rimba, which captures the struggles of the Orang Rimba people in protecting their way of life. Riri Riza is the leading film director of post-reform Indonesian cinema and is known for his ability to push the limits of genre conventions while achieving box office success.

In the documentary, In Exile, Myanmar filmmaker Tin Win Naing becomes a refugee amongst refugees, and his camera becomes his most important tool for survival.

Sayang Disayang by Sanif Olek was Singapore’s official entry to the Best Foreign Language Film category of the 87th Academy Awards. The film is about Murni, an Indonesian live-in nurse who works for Pak Harun, a lonely and bitter old Singaporean man who constantly harangues her. To appease him, Murni tries to replicate a sambal goreng dish that Harun’s late wife used to cook for him.

A Lao-Japanese co-production, The River Flows is about a woman who accidentally travels back in time to 1960s Laos and meets a man who is in Laos for a dam construction survey. The film was produced to commemorate the 60th anniversary of Lao-Japanese friendship.

In Brunei’s Anggur in Pockland, strange magical grapes visit those without purpose in life and transport them to the magical, worry-free realm of “Pockland.” What is the mystery and meaning of these grapes? Only a little boy called Pock has the answer.

Brillante Mendoza’s Thy Womb will also have a special screening. The film is about a woman who, failing to get pregnant a third time, embarks on a search for a second wife who can bear a child for her husband. Set in Tawi-Tawi, in southern Philippines, Thy Womb follows the couple as they sail from their floating village to nearby island communities until they finally find a woman from a different tribe who agrees to the arrangement. Mendoza is the only Filipino to have won the Best Director award from the prestigious Cannes film festival.

As part of its mission to promote film education, Tingin will also hold lectures on the art of watching movies, indigenous peoples, and indigenous representations in Philippine cinema.

In choosing the film selections for this year, festival programmer Patrick Campos said that he was guided by “the notion of ‘place’ — how people and individuals make home places, how their places are disrupted or invaded, how they are displaced, and how they make new places out of inhospitable situations, or fight for their places.” “All these themes resonate across Southeast Asia,” he said.