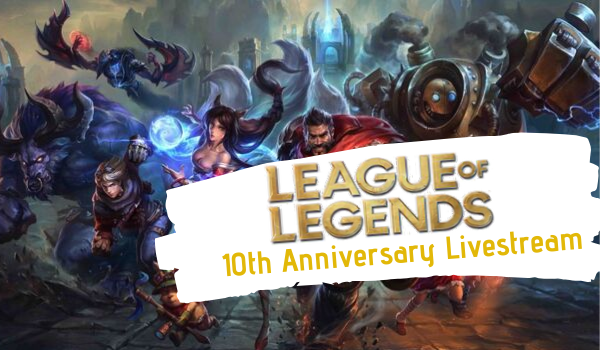 Riot Games is celebrating ten years of League of Legends, beginning with a 10th Anniversary edition of Riot Pls that will be livestreamed starting at 9 am SGT on October 16. The livestream will be available in the following languages on the following channels:


For those unable to catch the celebration live, VODs will be made available on the aforementioned channels.

In the 10th Anniversary Edition of Riot Pls, Riot will take a look back at memorable League of Legends moments and share a glimpse of the future, including a first look at this year's preseason changes and Teamfight Tactics' next big content update. Every day, League of Legends sees approximately 8 million peak concurrent players, making it the biggest PC game in the world.1In Greater Southeast Asia, League of Legends is published by Riot’s partner Garena.


“Building a passionate global community around League of Legends over the past decade is truly the accomplishment we are most proud of,” said Justin Hulog, General Manager, Riot Games Southeast Asia. “This special edition of Riot Pls will showcase our appreciation and commitment to players — we hope each of them will join us to celebrate all of the victories and unforgettable moments that we’ve shared!”

To mark the occasion and set the stage for the next ten years, Riot is updating the official League of Legends logo.