LOOK | New Posters for 'Dora,' 'Once Upon a Time in Hollywood,' 'Playing with Fire', 'Cats' 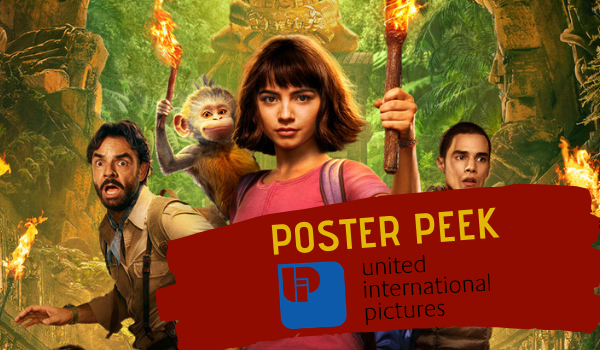 Beloved characters and  global superstars take the spotlight in newly unveiled one-sheet artworks for four of the year’s most highly awaited -- the family comedies Dora and the Lost City of Gold and Playing with Fire, the nostalgia trip Once Upon a Time…in Hollywood and the epic musical Cats.

Check out the posters below and watch Dora and the Lost City of Gold in Philippine cinemas on August 14, to be followed by Once Upon a Time…in Hollywood on August 28, Playing with Fire in November and Cats in January 2020.

All four films are distributed in the Philippines by Columbia Pictures.  Join the conversation by using the hashtags #DoraMovie, #OnceUponATimeInHollywood, #PlayingWithFireMovie and #CatsMovie.

Dora and the Lost City of Gold

An internationally beloved heroine springs to life on the big screen in Paramount Pictures’ Dora and the Lost City of Gold, the feature film debut of Dora the Explorer, the iconic Latinx trailblazer whose exploits have delighted parents and children alike since her 2000 Nickelodeon debut.


Having spent most of her life exploring the jungle with her parents, nothing could prepare sixteen-year-old Dora (Isabela Moner)  for her most dangerous adventure ever – High School. Always the explorer, Dora quickly finds herself leading Boots (her best friend, a monkey), Diego (Jeffrey Wahlberg), a mysterious jungle inhabitant (Eugenio Derbez), and a rag tag group of teens on a live-action adventure to save her parents (Eva Longoria, Michael Peña) and solve the impossible mystery behind a lost city of gold.

Once Upon a Time…in Hollywoood

Quentin Tarantino’s 9th film, Once Upon a Time... in Hollywood visits 1969 Los Angeles, where everything is changing, as TV star Rick Dalton (Leonardo DiCaprio) and his longtime stunt double Cliff Booth (Brad Pitt) make their way around an industry they hardly recognize anymore.   The ninth film from the writer-director features a large ensemble cast and multiple storylines in a tribute to the final moments of Hollywood’s golden age.

Written and Directed by Quentin Tarantino, Once Upon a Time... in Hollywood is produced by David Heyman, Shannon McIntosh and Quentin Tarantino.  The cast is led by Leonardo DiCaprio, Brad Pitt and Margot Robbie.

Nothing can prepare these elite firefighters (led by John Cena) for their most challenging job yet: babysitting.

When straight-laced fire superintendent Jake Carson (Cena) and his elite team of expert firefighters (Keegan-Michael Key, John Leguizamo and Tyler Mane) come to the rescue of three siblings (Brianna Hildebrand, Christian Convery and Finley Rose Slater) in the path of an encroaching wildfire, they quickly realize that no amount of training could prepare them for their most challenging job yet – babysitters. Unable to locate the children’s parents, the firefighters have their lives, jobs and even their fire depot turned upside down and quickly learn that kids – much like fires –are wild and unpredictable.