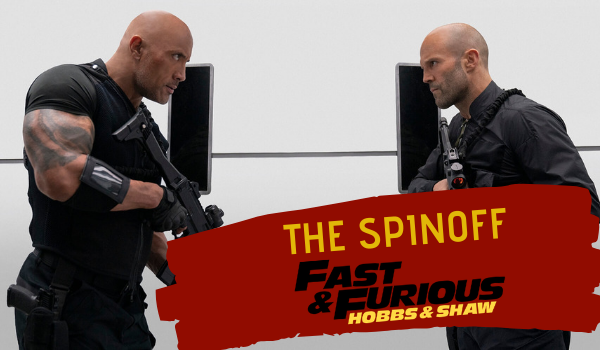 Although Fast fans already know Luke Hobbs and Deckard Shaw, director David Leitch wanted to re-introduce them on their own terms and establish their lives away from the rest of the Fast team.

The first scene in Fast & Furious: Hobbs & Shaw hilariously contrasts Hobbs’ laid-back life in California with Shaw’s extravagant life in London, using a split screen to highlight just how opposite these two heroes are.

“The opening sequence is really clever and is one of my favorite little moments of the movie,” Jason Statham says. “It’s spot-on because Hobbs and Shaw are so different yet so similar. I think it’s a tightrope that Dave walks rather well throughout the film.”


Luke Hobbs (Dwayne Johnson) is an exacting man with an unwavering moral code, but he’s also a man who cut himself off from his family more than 20 years ago, for reasons he won’t explain. When his daughter becomes more curious about her family tree, Hobbs tries to dodge her questions, but the events of the film will ultimately lead him back to his roots in Samoa, where he’ll be forced to face his past and make peace with his four brothers.

Meanwhile, Deckard Shaw (Statham) has his own family issues to deal with. Over the course of four films, the debonair British operative has shifted from foe to outlier, but that transition has often been perilous.

Audiences first learned of Shaw’s existence when he appeared, unnamed, in the mind-blowing postscript of Fast & Furious 6, where it was revealed that he was connected to the death of Han (Sung Kang). It wasn’t until Furious 7 that we learned that Shaw, a cold-blooded black ops assassin, had a score to settle. Shaw put Dom, Brian and the team on notice that he was coming after them to avenge his younger brother Owen (Luke Evans), who was then clinging to life in a military hospital.


In Fast & Furious 8, audiences caught a deeper glimpse of the man behind the façade of the covert ops assassin, when Shaw efficiently rescued and protected Dom’s son Nico alongside his resurrected brother Owen, and again when his mother Queenie Shaw (Helen Mirren), a mysterious woman with underworld connections, revealed the length’s an East London mum would go to protect her own.

Shaw’s interactions with Queenie—a combination of love and professional respect—gave audiences insight into the foundations of Shaw’s unique moral code and began to unveil the real man behind the lethal exterior.

The theme of family has always been one of the unifying threads that weaves through the Fast universe. Indeed, that theme takes center stage in Hobbs & Shaw and shapes the decisions and motivations of both lead characters.