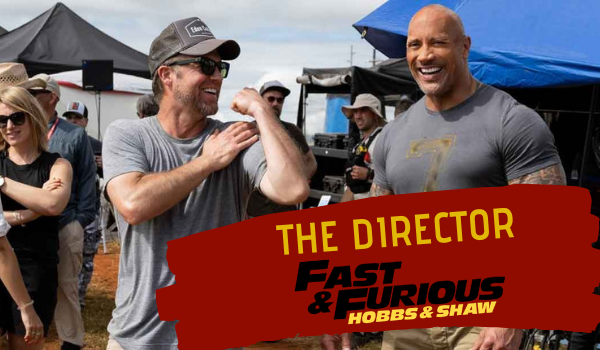 Equipped with the vision and skills necessary to harness the enormous scale, action, and humor of a Fast & Furious film, David Leitch directs the franchise’s first spinoff film, Hobbs & Shaw.

In Leitch, the producers knew they found a director with the versatility to do it all. Leitch’s recent hit box-office trifecta of Deadpool 2, Atomic Blonde and John Wick (co-directed with Chad Stahelski) proved that he could navigate a mix of genres and infuse the film with a fresh new cinematic take on action and character-driven story. It’s a rare combination of qualities for a director, but Leitch himself is a rarity.

The veteran stuntman—he worked as Brad Pitt’s stunt double on Mr. & Mrs. Smith, Troy and other films—had rapidly expanded his career, first becoming a stunt coordinator (TRON: Legacy), then a second unit director (Jurassic World and Captain America: Civil War), where he parlayed his ability to integrate innovative action sequences into any genre with a keen eye for storytelling. Leitch quickly became known as the go-to guy for filmmakers who needed a strong, adventurous point of view for their action units. That reputation jumpstarted his feature film directorial debut, alongside Stahelski, with the 2014 genre smash John Wick starring Keanu Reeves.

For Leitch, a fan of the Fast franchise, nothing is more enticing than striking out into new territory to create something genuine and unexpected. So, when word hit the street that the Fast spin-off Johnson had been teasing to his millions of followers on social media was, in fact, imminent, the director took notice. The opportunity to collaborate with two of the world’s biggest action stars and put his stamp on a new extension of a global billion-dollar franchise was a chance too great to ignore. Plus, Leitch had worked with John Statham on the star’s films The Mechanic and Parker, they had a great rapport, and Leitch already had an idea of how to inject the energy of a classic 1980s buddy comedy into the high-octane Fast universe.

“The chemistry between Dwayne and Jason in the last two films was pretty special and it’s hard to find that,” Leitch says. “To me, they kind of channeled the best moments of films like 48 Hours or Lethal Weapon. So, to have the opportunity to bring my action experience to these two characters, learn more about their backgrounds and build a world around that chemistry was really exciting to me.”

From the get-go, Leitch knew exactly how he wanted to present the mixed-match duo of Luke Hobbs and Deckard Shaw. He envisioned a very specific tone for the film, but it would retain the core dramatic themes of family and brotherhood intrinsic to the Fast films. He planned to mix that with visceral, practically executed action that diehard fans of the franchise would love. Leitch’s cutting-edge filmmaking style would showcase it all for a new, fresh, altogether different ride—with a seriously funny side.

“Infusing the humor into Hobbs & Shaw isn’t as hard as it seems,” Leitch says. “They have this history of ripping on each other, and it’s this dynamic that makes you want to spend more time with them to see that conflict play out because it is funny. It’s basically taking that idea and spreading it out over two hours.” To keep that comedic tension taut for two hours might seem like a challenge, but he had a plan. “Let’s keep these guys at odds, force them to work together and create that comedic tension throughout the whole piece,” Leitch says. “Because there’s such a comedy through line in the material, it allows us to do these flashes of more heightened comedy coupled with the classic comedy style that we’ve come to expect of this universe.”