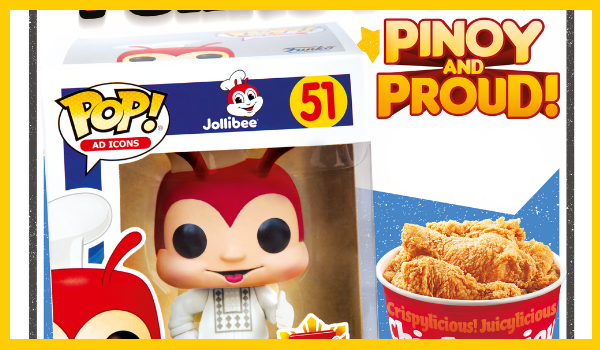 One of the country’s greatest pop culture icons will always be its most beloved bee—Jollibee. For over 40 years, Jollibee has made a notable mark in the lives of millions, making it stand out as a pillar of Filipino joy and pride, anywhere in the world.

Jollibee once again showcases  the true spirit of Pinoy pride, as it launches a new and exciting collaboration with Global toy brand Funko Pop that aims to pay tribute to an ever-jolly nation.

The simultaneous events will feature classic Pinoy games and special dance numbers from Jollibee and Friends. As the country ushers in its Independence Day, Jollibee will have a special appearance wearing a Barong Tagalog to launch the Jollibee in Philippine Barong Funko Pop!

When Jollibee launched its original Jollibee Funko Pop! at AsiaPop Comicon last year, thousands of Jollibee and Funko fans excitedly lined up for hours to get their hands on the Funko Pop!. And when it was released in selected Jollibee stores nationwide, Filbar’s, Toy Kingdom, Toys R Us, and Toy Town outlets, stocks quickly sold out. The Jollibee Funko Pop also led some to start their own collection of Funko Pops, further growing the local toy community.

From June 12 to 21, the limited-edition Jollibee in Philippine Barong Funko Pop! will be available exclusively in all stores nationwide for only P950 when they buy a 6-pc Chickenjoy Bucket Solo, valid for dine-in and take-out only.

So, head to the nearest Jollibee branch this Philippine Independence Day and your Pinoy Pride with this exclusive Jollibee in Philippine Barong Funko Pop! Per DTI-NCR permit no. 8956, series of 2019. See posters and prints ads for more details.