Comics scribe Greg Pak has unveiled the design for the new Filipino Marvel heroine Wave set to join the latest incarnation of "New Agents of Atlas" during the "War of Realms" crossover event.

Pak shared in Twitter that Filipino superstar artist Leinil Yu designed the character. "War of Realms: New Agents of Atlas #1" in May will feature interior art though by Gang-Hyuk Lim.

As announced at @sxsw, I'm thrilled to share the great @leinilyu's stunning design of WAVE, Marvel's new Filipino superhero! Gorgeous colors by @sunnygho! She'll appear for the first time in WAR OF THE REALMS: NEW AGENTS OF ATLAS #1 in May, with art by Gang-Hyuk Lim! pic.twitter.com/cZhwXbQ1FG
— Greg Pak (@gregpak) March 9, 2019

In the story, Earth becomes a battlefield as dark elf Malekith's forces lay siege upon the plane. After a shock-and-awe invasion, the Accursed splits the globe into provinces set to be ruled by his dark and damned collaborators. As Sindr, Immortal Queen of Muspelheim, and her legions of Fire Demons march on Asia, a new band of heroes - "New Agents of Atlas" must unite to protect the Pacific Rim. 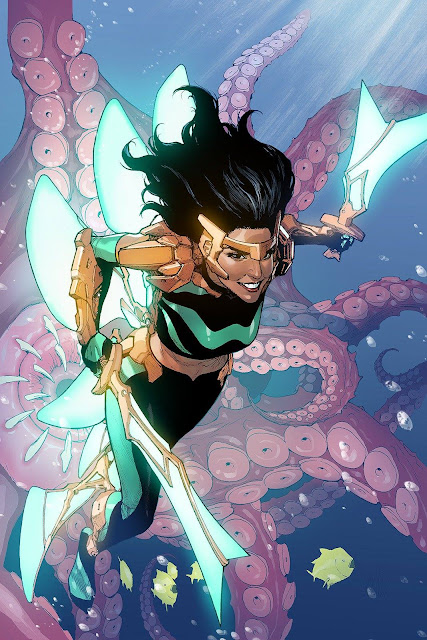 Wave is not the first Filipino Marvel superhero. In 2008, Marvel gave the Philippines its own super team when writer Matt Fraction and artist Salvador Larocca introduced the Triumph Division in “The Invincible Iron Man” #2. Triumph Division teamed up with Iron Man to fight the Mandarin.