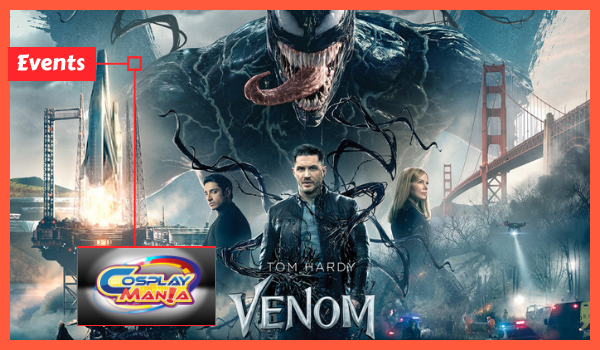 Embrace your inner anti-hero and check out the interactive Venom booth at the Cosplay Mania 2018 this weekend at SM Mall of Asia SMX Convention Center in Pasay City.

Fans can watch special footage, check out the mini symbiote lab, hear Venom speak on the listening wall, take selfies while on the Ducati Scrambler, get a chance to win Venom premiere tickets, score limited edition freebies and more when they visit the booth.

One of Marvel’s greatest and most complex characters takes center stage as Eddie Brock (Tom Hardy) becomes the host for the alien symbiote Venom. As a journalist, Eddie has been trying to take down the notorious Life Foundation scientist Carlton Drake (Riz Ahmed) for years – an obsession that ruined his career and his relationship with his girlfriend, Anne (Michelle Williams). When one of Drake’s experiments – the alien symbiote Venom – merges with Eddie’s body, he suddenly has incredible new superpowers, and the chance to do just about whatever he wants. Twisted, dark, unpredictable, and fueled by rage, Venom leaves Eddie wrestling to control dangerous abilities that he also finds empowering and intoxicating. As Eddie and Venom need each other to get what they’re looking for, they become more and more intertwined — where does Eddie end and Venom begin?