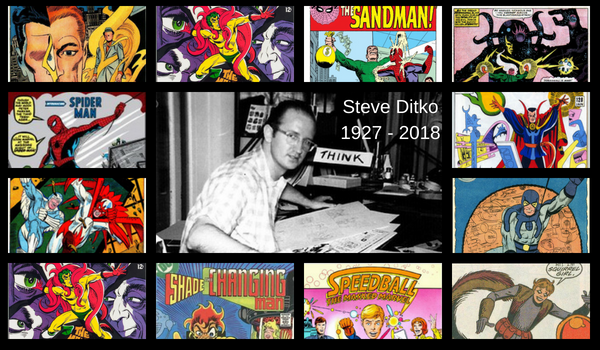 The Spider-Man and Doctor Strange co-creator was found dead in his apartment on June 29,  the New York Police Department confirmed to The Hollywood Reporter.

It is believed he died about two days earlier. No cause of death was announced.

With writer Stan Lee, Ditko co-created Spider-Man and his classic roster of villains that includes the Vulture and Sandman. He also collaborated with Lee in creating the psychedelic sorcerer Doctor Strange and its arch-nemesis Dormammu.

Ditko left Marvel after a falling out with Lee. The artist then went on to work for Charlton, DC Comics and other small independent publishers. He returned to Marvel in 1979, where he worked on Machine Man and the Micronauts, and he continued working for House of Ideas as a freelancer in the 1990s. In 1992, he co-created Squirrel Girl who gained popularity in recent years.

Ditko believes in Ayn Rand's objectivist philosophy, which says that  that unfettered self-interest is good and altruism is destructive. This is embodied in his creations Mr. A, DC's The Question, Hawk and Dove and the Creeper.

From the 70s on, Ditko refused to grant interviews, believing his art can speak for itself. He continued to self-publish comics until his death.

As expected, the comics and film industries paid tribute to the comics legend.

RIP to comic book legend Steve Ditko, beyond influential on countless planes of existence. He never truly profited from his comic creations that have lasted for decades, but his work will never be forgotten. pic.twitter.com/UBZQWpF79i
— edgarwright (@edgarwright) July 7, 2018


Steve Ditko was true to his own ideals. He saw things his own way, and he gave us ways of seeing that were unique. Often copied. Never equalled. I know I'm a different person because he was in the world. pic.twitter.com/2GFSA86Btj
— Neil Gaiman (@neilhimself) July 7, 2018

You all remember Steve Ditko for Spider-Man and Doctor Strange.

For me, I'll remember him for Speedball.

Back when I was at Marvel, I got lunch one day with legendary editor Ralph Macchio. We’re walking through midtown when some older gent walks past us and gives Ralph a nod.
“That was Steve Ditko.” Ralph says.
I looked back, but the old man was long gone.