It's all about timing and persistence — Pixar's Bryn Imagire 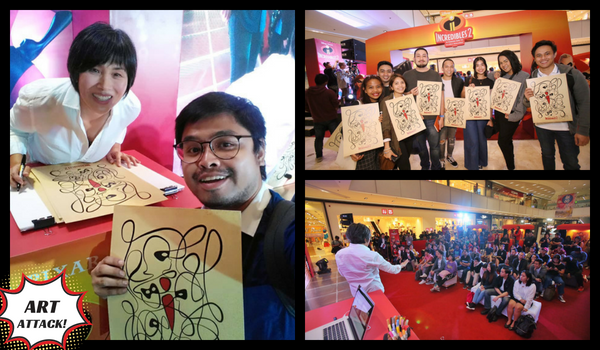 Besides talking about the evolution of the animation process from 2004’s The Incredibles to this year’s Incredibles 2, Imagire, who has been with Pixar Animation Studios since 1996, also showed the students the process of creating images for the film, including how base costume designs for major characters are tweaked to create costumes for extras or background characters. Imagire serves as both shading art director and costume designer for Incredibles 2. “Usually, it takes about three hours to render one scene,” she said.

Directed by Brad Bird and featuring the voices of Craig T. Nelson (Mr. Incredible), Holly Hunter (Elastigirl), Samuel L. Jackson (Frozone), and Bird (Edna Mode), the sequel picks up right after the events of the first Incredibles movie. “Our movies are all about storytelling, all the decisions we have to make are about telling an incredible story,” said Imagire.

Students from different universities and young professional creatives attended the workshop, with some lucky few, even able to ask Imagire questions.

One student asked Imagire how she got to be part of the Disney-Pixar family.

Imagire, who holds a BFA in Illustration from Art Center in Pasadena, California, had her own art studio for about seven years. “I would go to my studio, work, do may paintings, and come home. It got to be too routine for me,” said Imagire. “So when I heard that Pixar was making a movie about bugs [A Bug’s Life, Disney-Pixar’s follow-up to its hugely successful maiden release, Toy Story] -- I was really into drawing bugs, eagles, butterflies, a lot of nature drawings -- I applied [for a job at Disney-Pixar]. I kept calling and calling, they never called me back. But I was persistent and I kept calling until finally I got an interview.”

“My advice to students is be very persistent,” shared Imagire, “because this kind of business is based on timing and where you are at certain times. We need people at very specific times, so if you don’t get hired or we don’t call you back, it has nothing to do with your work; it’s probably just because we don’t need you at the time,” she advised the workshop attendees.

“Don’t be discouraged. If your work is strong and if you’re passionate about filmmaking, then you might just get the job,” added Imagire.

“What do you do to get inspiration?”, asked another student.

“I like to travel,” answered Imagire, especially after a big project, when she takes the time to visit places she’s never been before. “It is important to find those things that you really love to do and that inspire you,” she concluded. “Always make sure to take the time to replenish yourself and get inspired again.”