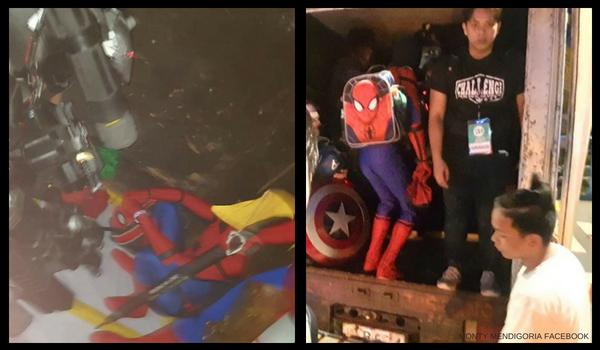 Cosplayer Monty Mendigoria posted on Facebook that about 15 cosplayers were transported via a closed delivery truck without ventilation. He added that Color Manila did not provide them food, water and shelter when it rained.

"They fitted 15 cosplayers inside in full costumes and armour like War Machine, Ironman Mk 46, etc. We were like life size statues being deployed for display and imagine the heat inside that truck. Damn it was hot!" he said in the Facebook post.

According to Mendigoria, there was no written and verbal agreement they had to be assigned in stations.

"When the rain fell, we do not have anything to cover our heads or at least a roof to keep us dry. Thanks that there was a tent beside an estero that we used as temporary shelter. No one from the organizer showed up and fetched us or at least went to us to give us umbrellas. No one from Color Manila was there and still, no food and WATER," read his Facebook post.

When the rain stopped, he said that some of them, still in costumes, were wet. They were expecting the truck to fetch them but to their surprise, motorcycles came to get them.

"Imagine, I was holding my Falcon wings and other armour since I suited down already and I was riding a Habal Habal? Paano pa sila War Machine at Iron Man?" he said.

Apparently, as shown in this video, War Machine cosplayer Christian Umali had to walk back to the main venue.

In his Facebook post, Umali said he had to walk for more than 500 meters because the organizers did not send a vehicle big enough to carry him back to the main venue.

"You can even get us for charity events and even ask us for free live appearances but please, treat us right and treat us nice," Mendigoria said.
"We are cosplayers, we are not mascots!"

As of posting, Color Manila has yet to respond to my request for comment or release an official statement to address the issue.

Update: An insider, who requested anonymity, has informed me the issue is being resolved between Color Manila and the cosplayers. He added that the concerns were raised right after the event but Mendigoria was not there to witness it.

He said that Color Manila has apologized to them and is now in talks with the cosplayers to settle the issue about compensation.

Update 2: Color Manila has forwarded a letter of apology to affected cosplayers, promising gift certificates to compensate for their bad experience. Read the letter here.