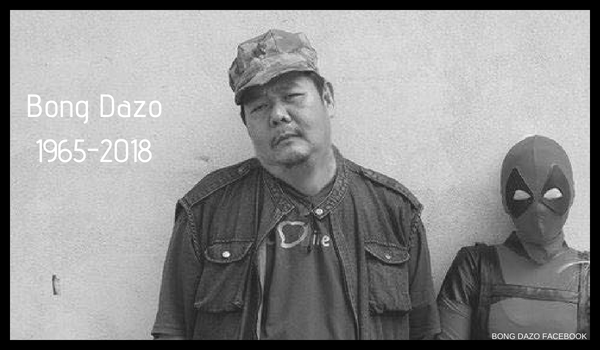 Tributes have poured in for Filipino Marvel and Dark Horse Comics artist Angelo “Bong” Ty Dazo, who succumbed to liver cancer on Friday.

His agent David Campiti and Marvel Entertainment confirmed the report. He passed away less than two weeks after his 53rd birthday.

He is survived by his wife Jessica and two children, Johan and Jianon. His wake is held at St. Peter Memorial Chapel, Bancal, Meycauayan, Bulacan.

Dazo is best known for his various work on Deadpool series for Marvel and Dark Horse's Star Wars: Knights of the Old Republic. For Deadpool, he collaborated with Victor Gischler on the series Deadpool: Merc With a Mouth, and also drew a few issues of Daniel Way's long run on the regular series.

He also contributed key tie-in series for various events for Marvel, including Secret Invasion, Shadowland and War of Kings. His most recent work was with 451 comics such as Bad Moon Rising and Darby Pop's Side-Kicked, and covers for Zenescope Entertainment's Belle: Beast Hunter.

Marvel is deeply saddened by the loss of Ty "Bong" Dazo, artist of Deadpool and more great comics. Our heartfelt condolences go out to his family, friends and fans around the world.
— Marvel Entertainment (@Marvel) June 30, 2018

I'm saddened to hear of Bong Dazo's passing. Although I never got to know him, I had the honour of working with him during Darkseid War. His energy and enthusiasm was something to be admired. My sincerest condolences to those whom he loved and loved him.
— Francis Manapul (@FrancisManapul) June 30, 2018

It is with great sadness to inform you of the passing of Angelo “Bong TY Dazo. He had been a friend and a valued member of our team for over 17 years and will be missed. Please keep Bongs’s family in your thoughts as they go through this difficult time pic.twitter.com/ra0eRrtxLu
— David Forrest (@kineticforrest) June 30, 2018