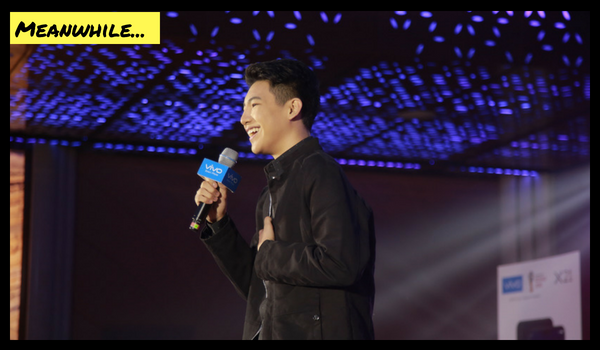 Global smartphone brand Vivo has unlocked the future of mobile technology in the Philippines as it introduced a new flagship phone, the X21 with the pioneering In-Display Fingerprint Scanning Technology, at its launch in Okada Manila on June 21.

The event, held in the Grand Ballroom of the picturesque oceanfront integrated resort, was well-attended by media partners and other guests despite the heavy rain.

“What is about to unfold before you is the reveal of the world’s first smartphone to feature an In-Display Fingerprint Scanner housed in a beautifully-designed all-glass build, a smartphone that is truly exceptional in more ways than one,” she said.

Vivo Philippines representatives Patrick Villareal and Jomarie Morales then went up on stage to explain each of the specs of the Vivo X21. The pair discussed how the In-Display Fingerprint Scanning Technology as well as the other features such as the AI Face Access, front and rear cameras with all-pixel dual-core sensor on the X21 work.

During the launch, Vivo also invited on stage some of the respected industry experts to discuss the X21-- Louie Diangson of Yugatech, Daniel Moral of GadgetMatch, Mark Milan Macanas of TechPinas, Giancarlo Viterbo of GadgetPilipinas, Peter Jan Icogo of Gizguide,  Jamie Inocian of Unbox, and Alora Uy Guerrero of Revu.

Diangson discussed the In-Display Fingerprint Scanning Technology and the AI Face Access of X21. Morial then explained how efficient the X21’s AI photography.

On the other hand, Macanas talked about Vivo X21’s front camera, specifically its AI Face Beauty.

Guerrero, finally, highlighted why Vivo X21 is one of the most advanced phones when it comes to audio playback.

Vivo, as the Official Smartphone Sponsor, of the FIFA World Cup Russia 2018 brought the football fever to the launch of X21. To get a glimpse of all the excitement in Russia, Vivo displayed some FIFA merchandise at the lobby.

During the presentation of the X21, Vivo mascots also showed the crowd how to do the #PassTheSwag FIFA dance. Vivo Philippines endorsers Vern and Verniece Enciso, Chie Filomeno, Maris Racal, and TJ Monterde then strutted the new flagship with a Vivo FIFA ball on their other hand while they proudly sport their favorite FIFA World Cup Russia 2018 team jersey.

TJ, on the other hand, expressed his support for the national team of football superstar Cristiano Ronaldo, Portugal.

Moreover, the Vivo Philippines team including Bascon, Villareal, Morales, as well as Brand Director Annie Lim were also bitten by the FIFA fever in their football-inspired garb.

The Vivo Philippines endorsers also took cues from the new X21 for their second look for the night.

The Vivo X21 has ditched the metal body for a new 3D glass back cover. The design was inspired by Iceland's Wake Black Beach, a rapidly cooling lava granule that is deep and dark yet free of impurities.

Vern and Verniece proved that they are young fashion icons in their Patty Ang creations.

Chienna and Maris, meanwhile, showed off that simplicity is the key to achieving elegance

Julie Anne San Jose who performed the closing number for the night looked like a total performer in her sparkly ensemble.

Darren Espanto who had a mini-concert at the launch with her four-song set and Mccoy de Leon who made sure he would be part of the event despite the rains looked dashing and sleek in their tailored outfits.

Bascon also revealed the price of Vivo X21 towards the end of the program.

The Vivo X21 is retailed for Php29,999 in authorized shops nationwide. The list of participating stores can be found here.