Elastigirl takes the lead in Disney-Pixar's 'The Incredibles 2' 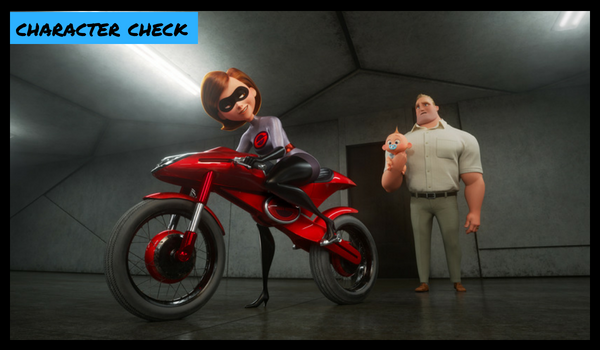 Helen Parr, known in the Super world as Elastigirl (voiced by Holly Hunter), hung up her supersuit to raise the family with husband Bob, leaving their crime-fighting days behind them. But when she’s tapped to lead a campaign to bring the Supers back into the spotlight in Disney-Pixar’s Incredibles 2, she finds she can still bend, stretch and twist herself into any shape needed to solve the trickiest of mysteries. In short, she’s still got it.

“We treat being a Super as a vocation,” says writer/director Brad Bird. “The government shuts down the program that protects Supers and provides them with housing and jobs. So Helen and Bob are faced with a real-life dilemma. ‘What’s next? How will we pay the bills and provide for our family?’ They’re just like the rest of us.”

Fortunately, opportunity knocks. Siblings Winston and Evelyn Deavor are huge fans of the Supers and are starting a campaign to improve their public image and ultimately bring them back. Says producer John Walker, “Evelyn does a cost-benefit analysis and finds that Helen tends to solve crimes with far less damage than Bob—so they choose Helen for the job.”

Adds producer Nicole Paradis Grindle, “Helen has spent the last several years shouldering the household responsibilities while Bob worked office jobs. But she was really good at being a Super—even if she’s forgotten that a little over the years. So she’s pretty excited to be back out there making a difference.”

Holly Hunter returns as the voice of Helen/Elastigirl. “I think she has total fearlessness when it comes to her role as a Super,” says Hunter. “But when it comes to her children, she has a very strong protective instinct. She has this innate desire to save others, which is a beautiful thing—especially in the world today.”

According to supervising animator Tony Fucile, Hunter brings important qualities to the character. “Holly has a very specific voice,” he says. “She has a lot of energy, toughness and intelligence, which really impacts how Helen moves.”


The character’s personality—the toughness and intelligence—actually affected how filmmakers shot her action sequences. Says Mahyar Abousaeedi, director of photography-camera, “We wanted to convey that Helen is a strategist—she’s a couple steps ahead of the game. She uses her environment to her advantage, which is different from Bob’s approach. She’s more proactive. I’ve always liked that about her.”

Hunter says the recording process was nothing but fun. “Brad [Bird] plays the other characters when we record,” she says. “I appreciate his sense of humor. He’s so playful.”
Labels: animation Disney Pixar movies