Principal photography has began on New Line Cinema’s gritty drama “The Kitchen,” written and directed by Andrea Berloff, who was nominated for an Oscar for the original screenplay for “Straight Outta Compton.”

Based on the Vertigo comic book series from DC Entertainment, the film stars Oscar nominee Melissa McCarthy (“Bridesmaids”), Tiffany Haddish (“Girls Trip”) and Elisabeth Moss (“The Handmaid’s Tale”) as three 1978 Hell’s Kitchen housewives whose mobster husbands are sent to prison by the FBI.  Left with little but a sharp ax to grind, the ladies take the Irish mafia’s matters into their own hands—proving unexpectedly adept at everything from running the rackets to taking out the competition…literally. 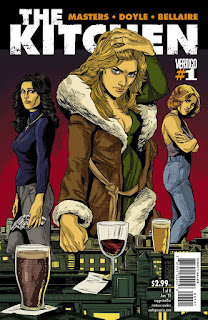 Berloff directs from her own screenplay, based on the comic book series created by Ollie Masters and Ming Doyle for Vertigo from DC Entertainment.  Multiple Oscar nominee Michael De Luca (“Captain Phillips,” “Moneyball” and “The Social Network”) and Marcus Viscidi (“Rampage”) are producing.