Take it from Thanos | Have a Go-Getter Attitude 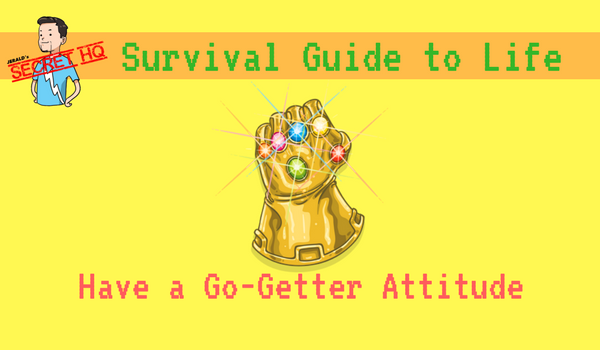 In the classic Marvel Comics event The Infinity Gauntlet, Thanos, the Mad Titan, sought out for the Infinity Gems, got them and literally became a god. Okay, he may not be the best example because he killed half of the universe and was eventually despised by the love of his life, the physical embodiment of Death herself.

Setting aside his villainy, Thanos is a go-getter. Whether he is looking for the Cosmic Cube or the Infinity Gems, he rarely has other people do it for him. The character's iteration in the Marvel Cinematic Universe even made a reference to this trait. Showing up in the mid-credits sequence of The Avengers: Age of Ultron,  Thanos slipped on his Infinity Gauntlet and stated – in the distinct voice of Josh Brolin -- "Fine. I'll do it myself."

That's why he is an awesome villain. When one takes charge of what he has to do, he becomes a force to reckon with. My geek friend from Flipgeeks, Mico Orda, perfectly captured it in his words, "Chase the stones like your life depends on it."

Ditto in the real life. Nothing will happen if you just depend on a shooting star. Or forgive me, pray without action. If you want the best in life, you have to seek it. If you don't ask, the answer will always be "no."

Now, you will hear people say, "Who does this guy think he is?" These people, most of the time, are just dreamers. They're not comfortable around go-getters because they do not have the courage to take the risk of being rejected. When you do fail, they're the first to celebrate because it makes them feel good about themselves. When you succeed, they're utterly silent.

Of course, if you don't do something with your dream, you're going to be safe from the sting of being turned down. But if you tend to be insecure of other people's achievements, you'd feel more miserable because you are not doing anything to change your status quo.

Go-getters are doers. Rejections have toughened them up and trained them to be resilient. That's how people get better deals and opportunities. Ask and show what you can do. If you get a "no," at least you are not regretting that you did not try.

I won't recommend though punching people like what Thanos is doing in the trailer for Avengers: Infinity War. I'm sure you get me.