Just a few months after playing the widely acclaimed Birdshot, the independent film company produced another noteworthy crime movie - Smaller and Smaller Circles. Pretty soon, the studio can move out of the shadows of Heneral Luna, its most popular movie to date, whose titular character became so iconic that the actor playing it has moved on to endorsing fried chicken.

The movie is based on the award-winning novel by journalist F.H. Batacan. Set in 1997, the story revolves around two Jesuit priests, one an expert in forensic anthropology, the younger a psychologist, tapped by the authorities to solve the serial killings in Payatas, Quezon City. The victims - adolescent boys whose faces, hearts, and genitals were brutally removed.

Having the story set in an era where massacre movies were the trend - remember those Carlo J. Caparas films starred by Kris Aquino, and there’s another movie with Kris Aquino, and another movie with her? -  Smaller and Smaller Circles shows what could the Philippine Cinema have done in creating a good crime movie. Previous movies were all about shock value, mirroring the tabloid headlines of that time, and missed the opportunity to give audiences something fresh and smart.

This is something that Smaller and Smaller Circles delivers. The story swaps the genders of the usual victims we often see in filmmaking. Cases of male rape in Philippine cinema are rare, and are arguably not given that much attention perhaps in the real world.

It can be said it is a spiritual successor to the Oscar-winning film Spotlight, similarly based on the true story of how its local Catholic Archdiocese covered up the massive scandal of child molestation. A subplot tacked how the two protagonists were also at odds with the church leadership, giving them a road block to solve crimes such as the Payatas serial killings. Add the politicking inside NBI, the movie is filled with trenchant social and political commentary. 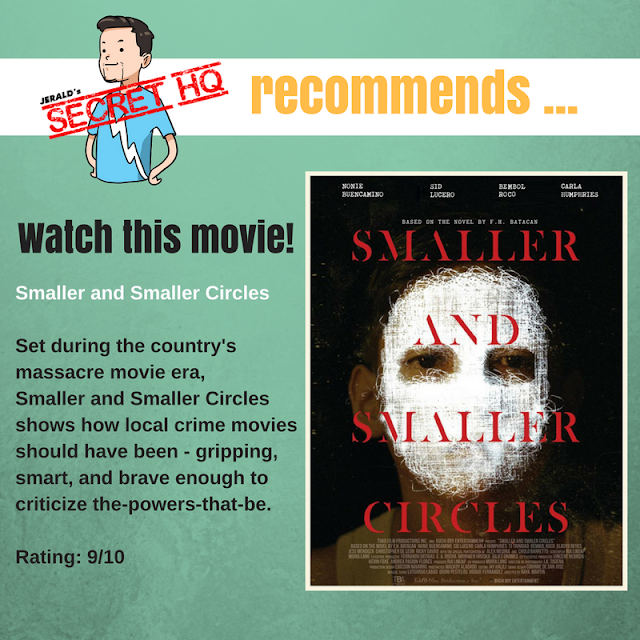 On the technical side, Pinoy viewers may have to rewire their brains when watching Smaller and Smaller Circles. Because we are so used to genre conventions that scenes in a Pinoy movie should dominantly be in the vernacular, the audience might feel uneasy in watching sequences delivered entirely in English; then it becomes Filipino the next.

It may also be a challenge to see the movie with subtitles, when the only part Filipino audiences need it for was when the older priest and the reporter conversed in French. There was a scene showing mIRC chat on the computer that makes the subtitles and voiceover triply redundant.

I haven’t read the book so I am free of the burden of comparing it to the source material. But the film was enough to make me want to read the book, especially that a sequel to the novel was hinted in the movie.

This is a good year for mystery and crime movie junkies like me.  Like Birdshot, Smaller and Smaller Circles satisfies our curiosity and hunger for quality detective stories.