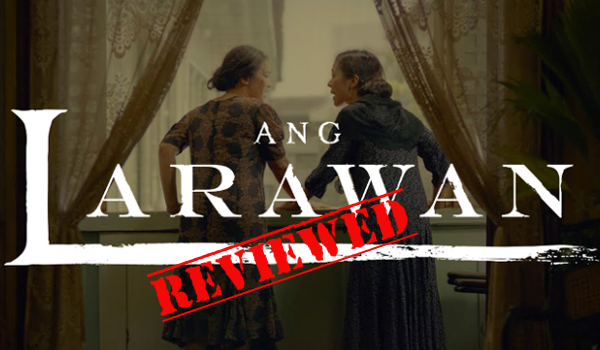 Before anything else, I entice you to watch the movie yourself. It is better than the junk food most people would be lining up to watch at this year’s Metro Manila Film Festival.

Claustrophobia puts relationships under the microscope - or in the case of Ang Larawan, a musical mostly set in a living room - zoomed in, shown in tight close-ups. And when space is limited, there is clash, and control for power.

Here we meet two spinster sisters, daughters of an ailing artist whose narcissistic painting is an object of desire and greed. The era - Pre-war Manila.

I caught the movie during the press screening in Promenade Greenhills, ran through the book the publicist gave me, watched the behind-the-scenes feature in Cinema One, and watched clips of the 1964 film adaptation directed by Lamberto Avellana on Youtube, to fully understand the Nick Joaquin opus.

A standout in the musical is Joanna Ampil. Her nuanced performance in the movie is breathtaking that it made me look her up online. Celeste Legaspi is literally a scene-stealer.

Setting aside their stellar acting and singing prowess, I find that the movie is more of an adaptation of the Rolando Tinio musical, which ran in CCP for years, rather than an imaginative take on the Nick Joaquin play that I can call a Loy Arcenas movie.

Despite learning in interviews that it was not a direct copy of the play, it still felt it was dependent on their source material. For me, there are lines that should not have been sung. It also tends to tell, than show. Case in point - (SPOILER ALERT) Paula telling what she did with the painting. This scene was more moving in the aforementioned 1964 film where Paula instead was shown using a knife to destroy his father’s painting and then burning it. Maybe I’m after shock value, you can accuse me of that.

There are decisions here that still maintain a theatrical sense of scenes and acts. While there are brief scenes in a church and on the streets, most of the actions are confined in the Marasigan residence. Theater often leaves parts of the story in the imagination of the audience. For obvious reasons, the space and probably, time are limited. But with cinema, there is an opportunity to develop characters.

When they do take the chance to maximize the strengths of the medium, some techniques do not work. (SPOILER ALERT) The father dallying towards the audience feels artificial. The actor seems to be riding a hoverboard, disrupting the illusion that it is set in pre-World War II Manila.

Zsa Zsa Padilla blocking an actress as they do a group pose, which appeared in the trailer, looks awkward. There’s no sense for the other actress to raise her hand if she won’t be appearing on screen anyway.

I still encourage everyone to watch Ang Larawan so we can get diverse choices in the upcoming festivals. Let me know what you think after you see the movie.