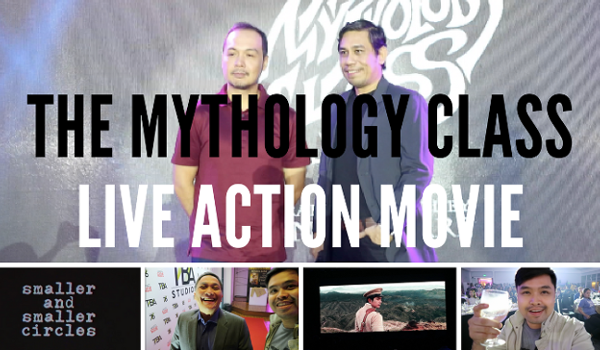 Ready your mystical kris and go engkanto hunting soon in the cinemas!

TBA Studios, the independent film company behind acclaimed movies Heneral Luna and Sunday Beauty Queen, has confirmed that the film adaptation of the popular graphic novel The Mythology Class is already in development. Its creator Arnold Arre and director Jerrold Tarog, who would helm the project, made the official announcement during the formal launch of TBA Studios.

Watch my vlog during the event here


Coinciding with the reveal, TBA Studios executive producers E.A. Rocha and Fernando Ortigas opened the event with major announcements on the company’s most recent partnership deals.

The group has entered into a strategic partnership with the country’s leading telecommunications company, Globe Telecom.  TBA Studios and Globe Studios are co-producing several projects including Goyo: Ang Batang Heneral, the much awaited follow-up to Jerrold Tarog’s Heneral Luna.  Globe is also going to provide marketing support for Birdshot, an official entry to the forthcoming Pista ng Pelikulang Pilipino, to ensure that the critically acclaimed film will reach more audience when it opens on August 16.

Cast members and directors of TBA Studios' upcoming and past movie projects attended the festivities. Also present were the different government agency partners as well as corporate sponsors, who helped TBA Studios along the way.

Aside from producing quality films, the company continues to expand its reach and scope by creating various distribution platforms that will promote and enrich the local movie industry. In 2016, the company launched Cinetropa, a Filipino-movie streaming site created exclusively to give Filipino films more exposure on a global scale, and Cinema ’76, a micro-cinema dedicated solely to regularly playing independent films.  With the success of Cinema ’76, Vincent Nebrida, TBA President and Cinema ’76 co-founder, announced that the popular micro-cinema would open a new and bigger branch very soon.  Cinema ’76 will also continue to hold series of master classes and workshops to hone multi-faceted skills in filmmaking.

It’s only been three years since TBA Studios has been established. Comprised of three movie outfits, Tuko Film Productions under Fernando Ortigas, E.A Rocha’s Buchi Boy Entertainment, and Artikulo Uno Productions, which produces Jerrold Tarog’s films, TBA Studios as a brand is fairly new. But despite being rookies in the industry, the group has made its mark in the Philippine film industry for pushing the envelope towards high quality filmmaking.

“Despite our age, Nando and I are the oldest babies in the industry,” Rocha quipped. “But we’re proud of what we’ve accomplished so far. They call us ‘game changers’, but really, it’s because the audience owned our vision. We want to make films that the Filipinos deserve.”

“We want to produce movies that Filipinos will remember,” Ortigas added. “We would like that everybody that goes to the movie theaters and sees the TBA branding would know that once they see it, they will enjoy the movie and come out happy with it.”
Labels: Arnold Arre geek Goyo Ang Batang Heneral Jerrold Tarog komiks movies Mythology Class Smaller and Smaller Circles TBA