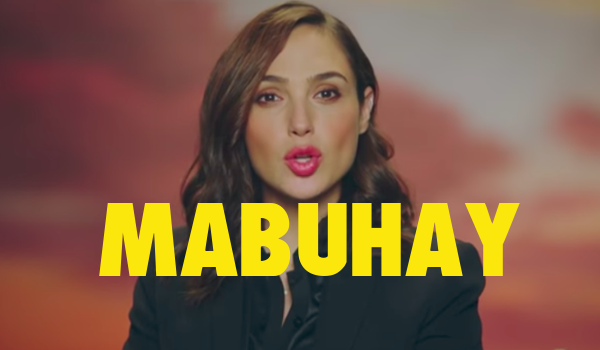 Warner Bros. Pictures has released a short video of Gal Gadot greeting her Filipino fans as she invited them to watch her film, Wonder Woman in Philippine cinemas June 1.

“Mabuhay, Philippines!,” starts the Israeli actress in the video.

“I'm Gal Gadot and I play Wonder Woman in the first-ever live-action `Wonder Woman' movie,” she continues. “From the gorgeous island paradise of Themyscira, to the World War I Europe, the film is full of action and adventure, as an Amazon warrior learns what it takes to become one of the greatest super heroes of all time.”

She concludes, “Don't miss Warner Woman in cinemas this June.”

Patty Jenkins directed the film from a screenplay by Allan Heinberg, story by Zack Snyder & Allan Heinberg and Jason Fuchs, based on characters from DC. Wonder Woman was created by William Moulton Marston.