Epic finish for The Hobbit trilogy


Peter Jackson's first two entries in The Hobbit trilogy both have been mediocre to merely satisfactory. After The Hobbit: The Desolation of Smaug's ending came to a screeching halt, audiences were left craving for a proper ending. The Hobbit: The Battle of the Five Armies gave them exactly it plus much more.

Fans of The Lord of the Rings Trilogy have mostly been disappointed by the first two Hobbit films because of its deliberate pacing and its lack of epic action. But what the first two lacked is fully abundant in this final entry in the series. It's as if Peter Jackson got drunk with Dwarf King madness and had the compulsion for epicness!

Finally, we have battles, armies, magic, monsters and other mythological creatures. It feels like everything had been reserved just for this final climax. And a lot of the time, it worked! The visuals have improved significantly. Peter Jackson has made this a thrilling and compelling ride. He has recaptured the magic that has captivated the world all around, a feeling void from the franchise since The Lord of the Rings: The Return of the King.

And once again, the performances by Martin Freeman as Bilbo Baggins and by Richard Armitage as Thorin are engaging, Richard Armitage specifically. He shifted through different ranges of rage and emotion and was more than terrifying and intimidating.

But of course, there are flaws, too. I'm always in the belief that every film should stand on its own, sequel or not. And this isn't one of them. Without watching the first two films there is no way a viewer will understand anything going on here. All developments are already in their final stages, Thorin's quest, the elves' conflicts, the horrid love story (which I really don't wanna talk about), the Orcs' problems, the Smaug issue, all of which new viewers won't be able to comprehend. Not to mention the characters that suddenly fall in the middle of the battle with no mention of their mere names.

Then there are the winks to the LOTR Trilogy. A lot of the characters and terms here seem like they've only been added for fan service and fan recognition. One example is Legolas, whom I think lost whatever quality that made him cool in the first place. I'm not saying it's damaging the series in "Star Wars Prequels" levels, no not at all. But it still does give you some head-scratchers.


And finally, for something entitled "The Hobbit", there isn't much of Bilbo Baggins in this film. While Martin Freeman is always excellent, we don't see much of the journey that has transformed him into a new man, or Hobbit if you want to be specific. We see him do honorable things, but we don't see the development within his character. He has been the same at the core throughout. Heck, he's been the same since the end of An Unexpected Journey, the only film of the series that actually lives up to the title "The Hobbit".

Nevertheless, The Battle of the Five Armies gave The Hobbit series a satisfactory ending to an otherwise disappointing series just for regaining that epic Lord of the Rings feel alone. After all, it was its world that fascinated us all, and it's still that world that holds us all in. 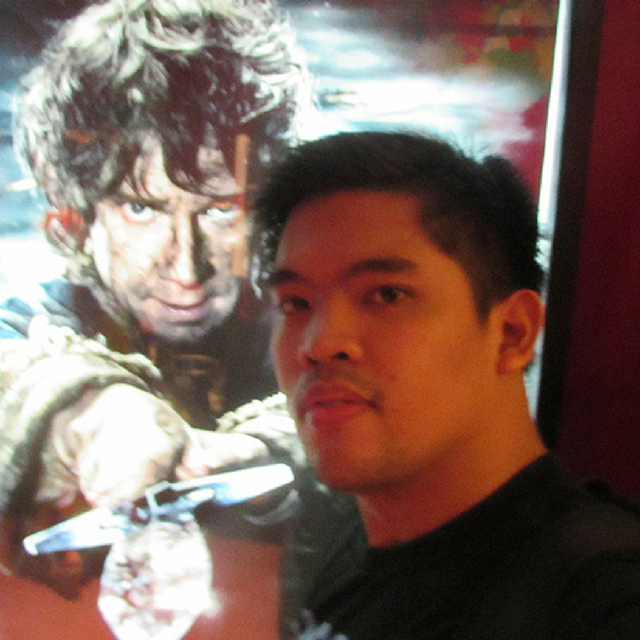 Franco Garcia is movie reviewer for The Review Avenue, a movie review channel founded by a group of film enthusiasts from the Philippines in 2014. You can watch their videos here.

He also writes basketball articles for Koytoys and is a freelance graphic and visual artist.

Franco Garcia's passion for basketball was instilled at a very young age. Movies, too, have always been a cherished pastime, but after studying Multimedia Arts at DLS-CSB, his love for film has only been enhanced and nurtured. Now, filmmaking and film reviews are his life.
Labels: Franco Garcia Guest Blog Lord of the Rings movie reviews movies pop The Hobbit