The sequel to 2012's Rurouni Kenshin (Samurai X), Rurouni Kenshin: Kyoto Inferno has the old charm of the anime we all grew up watching. The movie is a flawless adaptation of the Kyoto arc, though it made some liberties so to avoid making a convoluted narrative. It still managed to surprise those familliar with source material while being true to the characters' core.

Takeru Satoh's strength in acting different personalities, as seen in his previous show Kamen Rider Den-O, is well utilized in the movie. Aside from the usual flashbacks during the time he was the ruthless assasin Battosai, Satoh's Kenshin is in constant struggle between his pacifist personality and his deeply rooted killer instinct.

Emi Takei's Kaoru remains as the voice of reason in the movie. Unlike in the anime, probably because of the restraints of adapting the story arc into a film, Kaoru does not get her spotlight as a reliable fighter. She becomes a damsel in distress in the movie, used to move the story to the next unexpected twist.

Munetaka Aoki's Sanosuke is endearing. Viewers will root for him no matter how stupid his decisions are. There's a huge part in the movie where Sano is missing but fans of the anime have an idea of course where he went off to. Or do we?

New additions to the cast look like they came straight out of the anime. You will be amused at the perky ninja Misao (Tao Tsuchiya). You will even cheer for the grinning villain Sujiro (Ryunosuke Kamiki). Yes, Yumi, portrayed by Filipino-Japanese actress Maryjun Takahashi was as ruthless as her looks.

And then there's Shishio (Tatsuya Fujiwara), a sympathetic antagonist with a twisted backstory. Unlike in the anime where he generally keeps on evading to fight Kenshin, Shishio is shown as a mastermind terrorist, a great turn of events that offsets the undermining of Kaoru's characterization.

But at its core, it's all about Kenshin vs. Battosai, the constant battle against his dark self. People with past mistakes, addiction and anger issues can relate to the character's struggle to redeem himself.

All in all, Rurouni Kenshin: Kyoto Inferno is the biggest sequel Samurai X fans have been wanting to watch.

POSTSCRIPT
I hope you were able to grab a copy of the Philippine Daily Inquirer last Sunday! 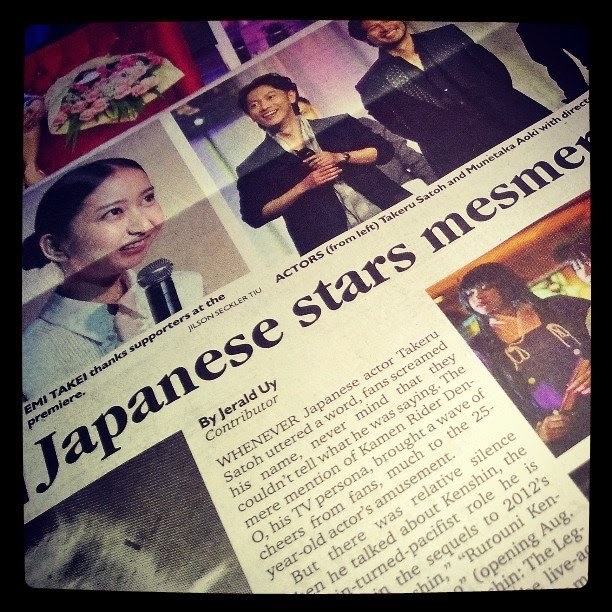