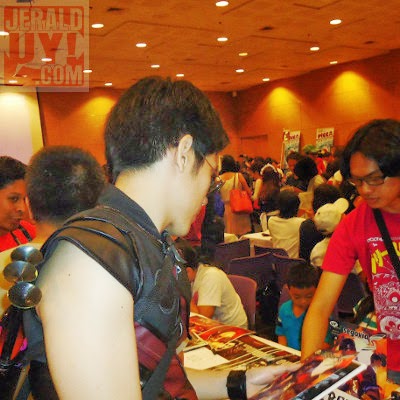 Make your Summer Komikon experience on Saturday, April 12, free of stress with these survival tips.

We're not talking about the volume of people attending Summer Komikon here. According to MMDA, DPWH is conducting reblocking and road repair projects this weekend, starting at 10 pm of April 11 to 5 am of April 14.

Here's a map to the Bayanihan Center: 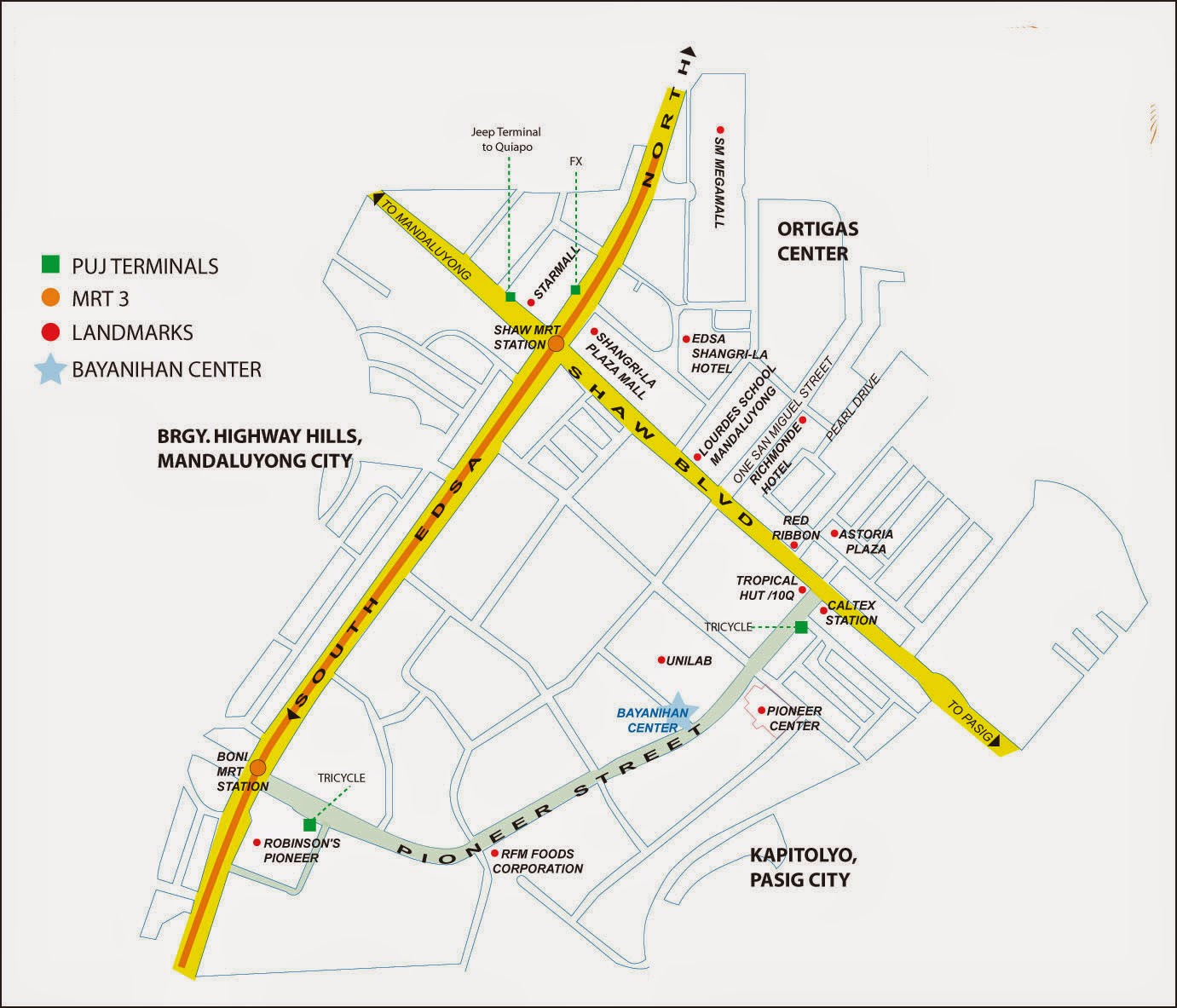 Instructions on how to get to Bayanihan Center:

Option 1
-Ride any bus going to EDSA.
-Get off at BONI, Robinson’s Mall Pioneer.
-Ride a tricycle at the mall’s terminal. Ask to be brought to Bayanihan Center (near Pioneer Center)

Option 2
-Ride any bus going to Crossing Ibabaw.
-Get off at Crossing/EDSA Central and walk towards Shaw Boulevard.
-Ride a jeep going to Pasig until you see Tropical Hut / 10Q.
-Ride a tricycle going to Bayanihan Center or take a walk along the sidewalk.

Option 1
-Get off at Boni Station.
-Go to Robinson’s Mall Pioneer.
-Ride a tricycle to Bayanihan Center (near Pioneer Center)

FX from Manila (Quiapo):
-Ride a Quiapo – Magamall FX.
-Get off at the corner of One San Miguel Street.
-Walk along Shaw Blvd. until you see Tropical Hut / 10Q (one block away) on the other side of the street.
-Ride a tricycle going to Bayanihan Center or take a walk along the sidewalk.

(From south of EDSA)
-Turn right at the corner of Robinson’s Mall Pioneer, that is PIONEER STREET.
-Go straight to Bayanihan Center located at the left side of the street.

(From north of EDSA)
-Turn right at Starmall (Crossing Ibabaw).
-Make a U-Turn to Shaw Blvd.
-Go straight and turn right when you see Tropical Hut / 10Q (Pioneer Street).
-Look for Bayanihan Center to your right.

*Paid Parking is available at the Bayanihan Center, and at Pioneer Grill and Pioneer Center across the street.

Thefts have been reported in the past, including one of the organizers' colleagues losing her laptop. It is best to only bring gadgets that you would only need. The comic convention is not the right place to brandish your latest tech.

In reverse, do not steal artworks, comics and other merchandise when the exhibitor is not looking, unless you want to serve some jail time. Thanks to Pasig Police that they have delegated officers at the con.

Despite your innocent intentions, it can hurt some of the exhibitors who paid for space at the Bayanihan Center.

Listing down your target comics to buy budgets your money and saves your time. The image below shows some of the new releases at Summer Komikon. I also shared 6 top picks on Coconuts Manila. 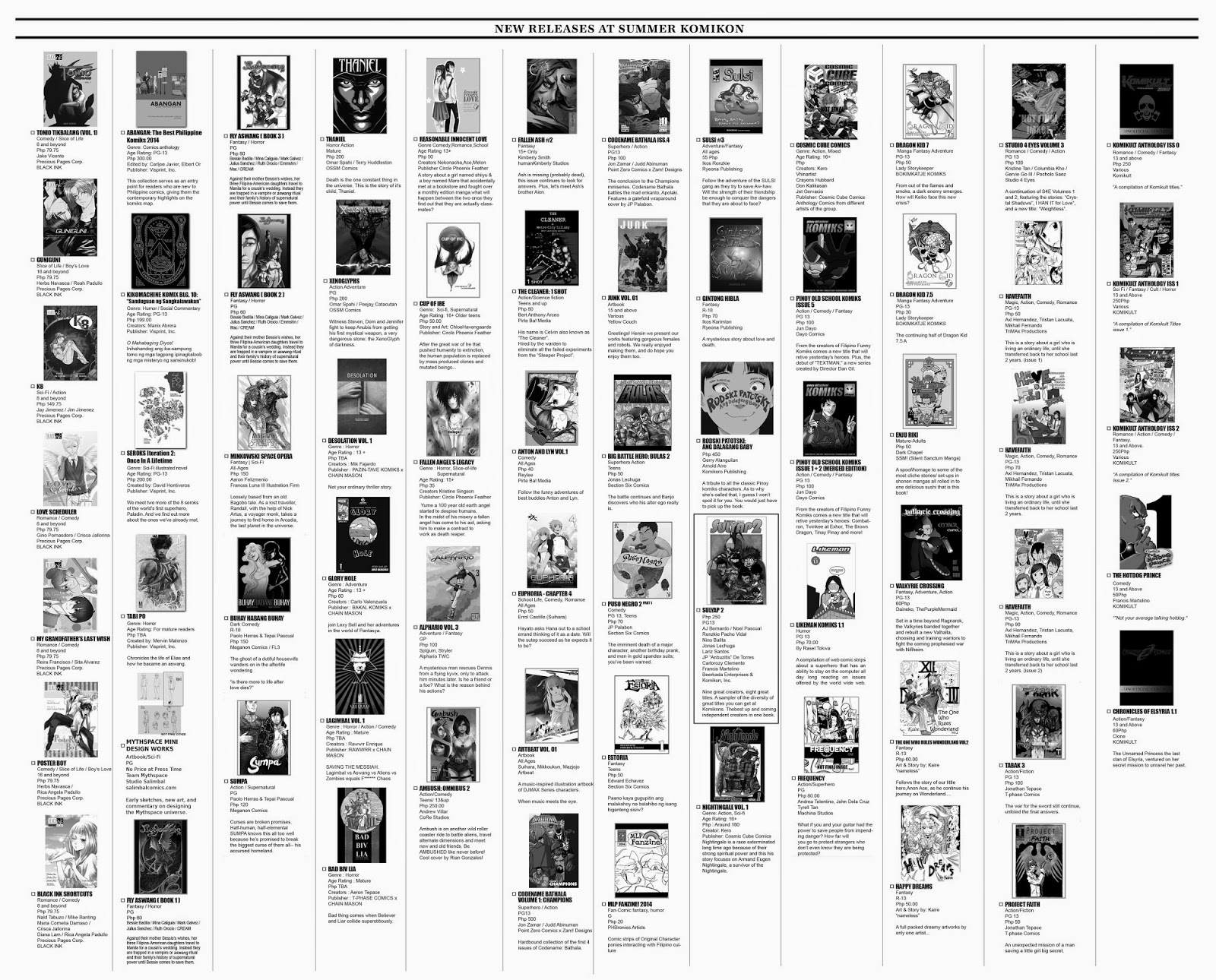 Bring lots of coins, too. Don't stress yourself and the seller looking for exact change.

Stress levels are high at the jam-packed event so keep your negative remarks and unsolicited advice to a minimum.

7. Don't ask for a quick sketch for the purpose of selling it on EBay.

Pencillers like Leinil Yu and Mico Suayan had experienced this. It is disrespectful to them as artists.