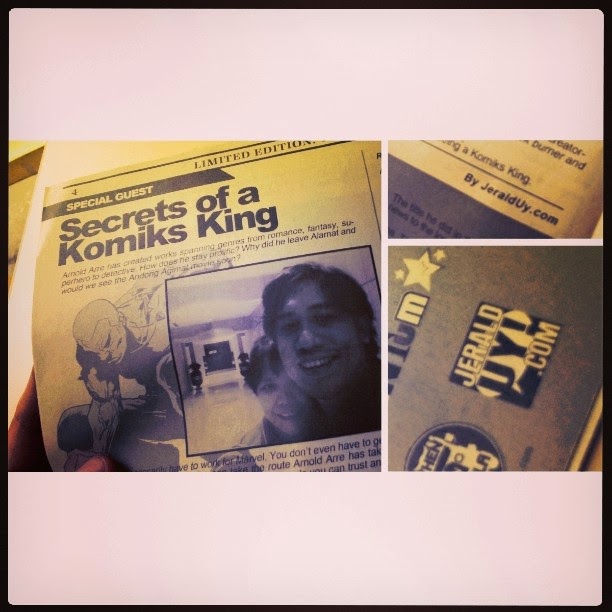 Arnold Arre has created works spanning genres from romance, fantasy, superhero to detective. How does he stay prolific? Why did he leave Alamat and would we see the Andong Agimat movie soon?

You don’t necessarily have to work for Marvel. You don’t even have to get the nods of comics luminaries. You can take the route Arnold Arre has taken—work on personal projects, collaborate only with people you can trust and only create your comics when you’re in the zone.

In 1995, Arre, while in New York, was invited for an interview at Marvel Comics but decided not to go. “It's one of those things you feel in your bones and no one else can convince you otherwise. Looking back, I guess I wanted to be free and to do my own projects at my own pace,” he said.

“I guess like anyone who's part of a group, after a while, you suddenly begin to crave freedom. That was how it was; I wanted to work at my own pace and on my own personal projects. I don't think I would've been able to do all the stuff I've been doing and even pursue animation if I was still part of any group. As an artist, freedom is very important to me,” he shared.

Eventually, those decisions turned to his favor. Arre won several awards and received critical acclaim for his graphic novels Mythology Class, After Eden, Trip to Tagaytay, Martial Law Babies and Ang Mundo ni Andong Agimat.  Admitting his flair for one-shot stories, he said that with graphic novels, a reader gets the full story right away, making him feel more satisfied in getting the book.

“Personally I prefer one-shots so I don't have to wait and collect issues. I have the whole story in my hand,” he said. Arre added that reprints of his works will be available soon.

To stay prolific, Arre constantly pluck story ideas from his childhood and personal experiences through the years. He and wife would also travel, not only to be exposed to other cultures, but also to become more appreciative of what we have.

Arre stressed that because our culture is very rich, he often draws inspiration from our history, mythology and folk tales.

“Now some of our artists, including myself and several of my friends, are promoting Filipino culture through their work. But my concern is that there are only a few of us and we need help. This means that if other artists are promoting someone else's culture, (whether it's American, Japanese, or European) then unfortunately, it's a plus for those countries, not us,” Arre said.

Arre also reminded artists who are copying a certain look that there is a tendency to imitate the nuances of their culture too. “Again, this is why I always recommend trying to find and develop your own drawing style”
“So to the next generation of comic artists I want to say this—help us. Mine our culture and promote it, we have so many wonderful stories to tell the world.”

Reconcile your day job with your passion

Arre does not recommend comics as the only source of income for aspiring Filipino creators. He said that unlike in the US and Japan, the Philippines does not have a thriving publishing industry enough to give a satisfying paycheck.

But what he learned was that a day job could help him fund his personal projects, improve his storytelling and teach him new skills like marketing his works.

“I took on a lot of design and illustration jobs to fund self-publishing. Fortunately I had a few comic titles that were picked up by Adarna and Nautilus,” Arre recalled.  “Working in advertising also taught me to inject some strategic thinking in terms of marketing, and I guess doing all those storyboards before helped enhance my illustrating and storytelling.”

Write when you are in the zone

Mornings and evening are the perfect time for him to come up with new ideas. “There are also times when I have a really good idea that I can't wait to work on so I jump right into it upon waking up,” Arre shared.
He advised to not force yourself to write when you have writer’s block. Instead, do something that is totally unrelated from comics like listening to music or playing with your cat.

“The good thing about being self-employed is that I don't have a set schedule. I usually play video games or surf the internet in the morning to relax. That usually frees my mind so in the afternoon, I'm ready to start working and that can last until the wee hours of the next morning,” he added.

Work with people you can trust

Arre said that while it is easier now to network with other comic book creators through social media, he is still picky with the people he would be collaborating with

“I've worked with Gerry Alanguilan, Jamie Bautista, Emil Flores, Marco Dimaano and Chris Costello to name a few. We're friends to begin with and I've known them for a long time. There's a lot of trust involved which is most important when you collaborate,” he said.

What’s next for the Komiks King?

Currently, Arre’s Tala Studios has taken a backseat in producing comics since 2009 so he could work on his animation projects under his new company, 1227 Animation.  Arre initially intended to pursue live-action filmmaking. But due to logistics constraints after creating two short films, Arre familiarized himself in making his illustrations move using  a video editing software.

“I did a test and it ended up being Andong Agimat: Kanya ang Kalye. The response was good and I felt fulfilled because I was doing two things I loved at the same time—drawing and making films. Rock Ed Philippines and the National Historical Commission gave me my first official project, the Kaninong Anino video for Jose Rizal's anniversary. I've been animating since,” he said.

Arre also confirmed that the movie based on his graphic novel, Ang Mundo ni Andong Agimat, is still under development and that he is also working on a new animated project that heavily involves Filpino Martial Arts.

At Summer Komikon on April 12, Arre is set to hold a screening of his animated short film, Milkyboy.
“No, I'm not going to quit creating comics,” the 42-year old comic book creator-animator said in protest. “I actually have some story ideas in the back burner and maybe I'll release them in a few years time.”

Looks like Arnold Arre is earning a new title next to being a Komiks King.