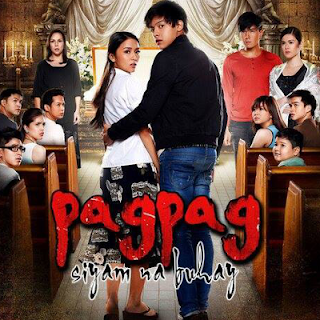 Pagpag: Siyam na Buhay, like the horror house that appeared in one of its scenes, sells and brings shock to its audience but falls short in telling a cohesive story. It exists only to provoke moviegoers to shriek or tuck themselves in their seats in disgust. Riddled with loose ends, the sole horror film entry to this year's Metro Manila Film Festival should shake off the plot holes.

There is no recurring theme in the movie. The commonality of why victims are being murdered - their ignorance to supertitions during the wake - is thrown out of the window when a character, who was the most knowledgeable of these mistakes, was sucked into a tomb. Even one of the victims who was "sandwiched" between two trucks because he took food from the wake had nothing to do with the demonic ghost.

Another way to look into its lack of cohesiveness is its narrative. What does the movie want to tell us? Is it the male protagonist's rebellious nature against its dad? Is it the female protagonist's missing parents who have nothing to do with the story but she mentions it? Or is it the missing adults in the film's entirety? What about the male protagonist being suspected of killing his friends? I know what an open-ended scene is, but come on, these details should have been referenced before the credits roll.

What would you get after watching "Pagpag," the sole horror film entry in this year's Metro Manila Film Festival? That evil, whether in its ghostly or tangible form, wins.

I am hesitant to say it is about family. That telenovela twist where we learn the real parents of the child (Does this ring a bell?) combined with incessant crying, makes viewers confuse what genre are they really watching.