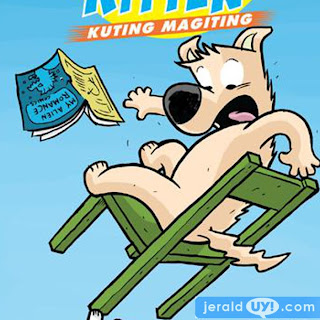 Award-winning children's books author Robert Magnuson has unveiled a new cover for Kuting Magiting #1, a  comic book about a kitten with superpowers and his friendship with Good Morning Dog.

"Is it too early for November 2013 Komikon news? If you take a good look at the dimensions of the first edition of KM#1's overall comic grid, you'll find that it's smaller, but proportional to the size of my children's books (Bullysaurus Rex, Mister Beetle's Many Rooms, etc.). Due to lack of funds, the first edition was all I could come up with at the time. But thanks to your support (and the discipline of saving money) this November sees the release of Kuting Magiting #1 which is completely redesigned with the help of amazing book designer R Jordan P Santos," Magnuson posted on Facebook.

He also announced that the edition of Kuting Magiting #1 pictured below will no longer be reprinted.