No more cages: What I learned from a single issue of Avengers 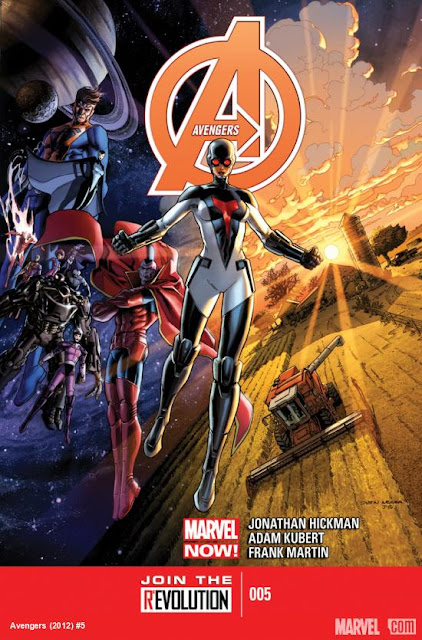 A line from a novel is often quoted for its insights.  Words from a comic book? Rarely.

I intended to lift some lines from the fifth issue of Jonathan Hickman’s “Avengers,” a story that struck me and relieved me that I got my money’s worth—P199.50 to be exact. But after I re-read it, there were no words that I thought could capture the message of the story, which worked as the sum of its parts.

The story centers on Isabel Dare or Izzy, an astronomy student in Colorado who has returned to her rural town in Iowa to help take care of her grandfather suffering from Emphyzema.

After finding a pair of alien goggles on their farm, Izzy went home and learned that her grandfather had freed their livestock. The old man insisted he did not like things in cages. The conversation then led to her grandfather questioning her why she was in Iowa when she should be pursuing her love for anything celestial in the big city.

“Sky’s clear—I can see the heavens. It’s not so bad,” Izzy said. “I don’t regret doing the right thing.”

“Sure. I got some of that,” her grandpa replied.

“Then you understand just fine, why do you keep giving me a hard time about it?”

“I don’t like things in cages,” her grandpa responded.

While observing the skies, the sentient goggles told her to put them on, transforming her to a female Smasher, one of the members-in-training for the Imperial Guard of the Shi’ar Galaxy. Her grandfather witnessed her flying to space.

A month passed, Smasher returned to Earth and learned that her grandfather was dying. He handed her an Avengers calling card given to him by Captain America, who probably knew her grandfather in World War II.

He told her, “No more cages,” implying that she should join the Avengers.

Hickman employed a non-linear narrative with a bunch of flash forwards to the present-day, showing that Izzy’s  resilience as a heroine helped her upgrade to “Superguardian” status and became the first human member of the galactic Imperial Guard.

“The old man would be proud,” Captain America told her.

Are you living in a cage?

Hickman is a genius for telling a science fiction story that is at the same time grounded and character-driven. I was not fond of the character when she appeared in the previous issues that obviously were plot-driven. Here, we get a space-faring heroine who is very human—literally and figuratively.

The story also triggers us to look back at the time when we were filled with aspirations and ambitions—before life happened. We may have set aside some of our dreams because of other immediate obligations—taking care of a sick parent or getting a job that you do not really love doing but it pays the bills. We may have settled for something less because we thought that was the only thing we could achieve.

So are you living in a cage? Will you do something about it?
Labels: comics insights