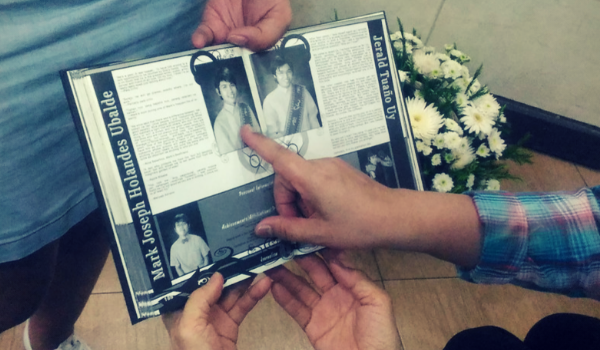 I only had two real friends in college. I was probably self-aware at 17 that I was satisfied to only have a few people to hang out with. One is JP, who eventually migrated in the U.S. We still connect with each other through Viber. And then there’s Mark. Most people know him professionally as Seph Ubalde, the TV anchor.

My college days were either spent with JP or Mark. But JP was a year ahead of me so Mark became my default buddy in journalism classes. I remember the time when our PolSci lecturer caught Mark giving me signals so he could answer the professor’s questions. Our teacher found it amusing because he was looking at me for clues - I was about 5 seats away from him.

Mark at the time ran his own Livejournal. (Yes, that is an active link). He was also a critic of my early blog. Mark thought my background was too dark. When I mentioned I wanted to be a reporter, Mark told me I should learn how to modulate my voice.

What I remember most about him - he did not want to see me alone. Several times I found myself in a cell group of UP Streetdance Club, and later staying in the cubicle of UP Journalism Club - organizations I wasn’t formally part of. He would always drag me to some place, whether it’s a stroll around SM North or a streetdance concert.

This is a different Easter for all of us. And the abstract concepts often thrown flippantly take a new meaning. Rebirth. Second chances. Nth chances. Forgiveness. Life. @seph_ubalde


We also had petty fights, or in retrospect, those disagreements had to happen because we were both growing up. When we were not able to submit a project on time in a Yvonne Chua class, he told our professor to flunk him instead and give me a passing grade. Mark was working as a fastfood cashier at that time.

It was also Mark who made amends and apologized over a huge falling out we had. His friend Janice made sure that I’d know Mark was not really the-one-who-says-sorry. But he said it to me.

With his passing, I’ve lost a brother. I am lucky to kind of own him for three and a half years as a friend, before the rest of our department and later, those who watch weather reports and dance videos, know how awesome he is...he was. I am quite grateful that I also had him almost exclusively on the first day of the wake. I’m glad that there were no CCTV cameras to capture my MMK moment.

I tried to remove emotions from writing this piece. I apologize if this did not move you to tears. My Facebook friends may have grown tired of those sentimental posts for almost a month. I also tried my hardest to invalidate this sense of loss because we’ve lost touch. I tried reconnecting with him last year but to no avail.

I find regret that we shared the same backstories about domestic abuse, and eventually dealt bouts of depression separately, not knowing that we could have supported each other. It also bothers me that the last place Mark was last seen, was only a few blocks where I live.

I would always go back to the tiniest time I wasted, whether it’s him asking me to stay a bit longer in UP, or the times we just looked at each other and went on our way because we argued over a petty thing. I would always recall the memory of us, walking to the CHK exit after class. By the time we'd reach Commonwealth Ave., I’d tap his shoulder and say, “Bye, Mark.”